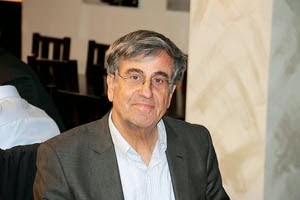 It’s been a historic week for activists campaigning for the rights of Jews from Arab lands. The Israeli Knesset has passed a law which will for the first time designate  30th November as a national day of commemoration for the million or so Jewish refugees forced to flee Arab lands and Iran. Lyn Julius blogs in the Jerusalem Post:


“Today, we have finally corrected an historic injustice and placed the issue of Jews who were expelled or pushed out of the Arab world in the last century on the national and international agenda,” said MK Shimon Ohayon (pictured) , who proposed the law. “In Israel, the history of the Jews who originally came from the Middle East or North Africa, who make up around half of the population, was ignored for too long.”
“From this year, every child in Israel will learn about the history of the Jews of the region, who arrived long before the Islamic conquest and Arab occupation of the region. This is a vital part of our fight against those internally and externally who delegitimize our presence here in the region and claim we are somehow foreign to the region.”
Scandalous but true - Israeli children may  learn very little about the ancient Jewish communities of the Middle East and North Africa, and even less about how these were driven to extinction in a single generation by a combination of physical threats, state-sanctioned legislation and pogroms. In short, ethnic cleansing.
The date of 30 November was chosen for what might come to be known as Jewish Refugee Day  to mark the onset of a series of anti-Jewish riots.  Jews were murdered and Jewish property ransacked in Syria, Bahrain and Aden as demonstrations to protest the UN Partition Plan  on 29 November 1947 turned violent.
But November 1947 was not the start of Jewish troubles, nor should it be seen as the beginning of an ‘understandable backlash’ to Zionism.  Jews  in Iraq had already been traumatised by the 1941 Farhud, which claimed the lives of 179 Jews. Three years before Israel was born, anti-Jewish riots broke out in Libya, Egypt, and Syria. Hundreds were murdered, many were dispossessed or made homeless.
Before the UN  Partition Plan  resolution was passed, and before a single Arab refugee had fled Palestine, the Arab League was colluding in a series of measures which would victimise their Jewish citizens as the ‘Jewish minority of Palestine’. Zionism would become a criminal offence, Jewish bank accounts frozen and Jews arrested and interned on the slightest pretext.
Just as the state of Israel was established on 15 May, 1948, five member states of the Arab League sent their armies in to crush the newborn state and exterminate its people. Azzam Pasha,  secretary of the Arab League, proclaimed: "[T]his will be a war of extermination and a momentous massacre which will be spoken of like the Mongolian massacres and the crusades."
Everybody knows that the Arabs failed to win the war against the Jewish state. However, they decisively won the war against their defenceless Jewish citizens - setting off a mass exodus, mostly to Israel. The number of Jewish refugees was greater than the number of Palestinian refugees.
Naturally, not all the history of more than 2,000 years of Jewish life in the Arab world is about suffering and pogroms. The average schoolchild will also learn about the extensive Jewish contribution to the fabric of Middle Eastern and North African society,  trade, culture, literature and music.
But the main purpose of the Day is to explain why 50 percent of Israel's Jews hail from Arab and Muslim lands.
Without an understanding of Jewish refugees and how most ended up as citizens of Israel, there can be no understanding of what drives the Arab quarrel with Jews and Zionism, nor how best to resolve it.

We have finally corrected a historic injustice

The initial drive to establish a Jewish state was to a great extent the goal of having a safe haven for Jews because of unrelenting persecution in Europe. Ironically, the behavior of Arab states, in expelling and dispossessing their Jewish populations, only served to *reinforce* that notion, namely, that Jews need to have a safe haven. Arab behavior essentially justified the Jewish project.

Harold, actually such early Zionists as Pinsker & Herzl were aware of Jewish persecution in Arab countries. Pinsker specifically mentioned Morocco in his Autoemancipation [circa 1885] as a country where the persecution of Jews was most severe, along with Russia and Rumania. Morocco was then independent. In Algeria, during the Dreyfus Case, Jews were attacked by mobs made up of both Arabs and French settlers.