Baghdad book review gets it wrong 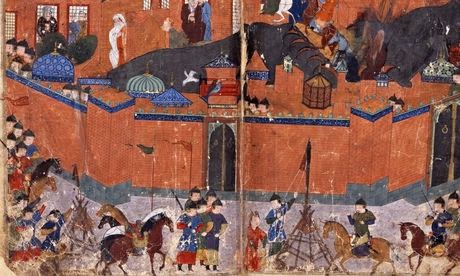 Have you noticed how Arab nationalism can never be held solely responsible for the ethnic cleansing of  the Middle East's minorities? Those two betes noires of trendy western elites are invariably thrown into the same basket - colonialism and Zionism.

Here we have a classic example in the Guardian review by Christophe de Bellaigue of Justin Marozzi's book Baghdad.

"There were 80,000 Jews in Baghdad before the first world war, and they sat in the Istanbul parliament – halcyon days before the combined effects of British colonisation, Zionism and Arab nationalism ended the Jewish presence for good. When Marozzi arrived in Baghdad in 2004, the community was seven-strong."

Not exactly correct. The Jews would not have had representatives in the Istanbul parliament had the western powers not brought pressure in the second half of the 19th century to bear on the Ottoman empire to emancipate their 'dhimmi' non-Muslim subjects.

It is inaccurate to blame British colonialism for the end of the Jewish community. Quite the contrary: the 1920s under British mandate were the real halcyon days for the Jews - a time of great prosperity, when Jews staffed the civil service and provided the backbone to Iraq's economy. The country's first finance minister, Sasson Heskel, was a Jew.

Nor is it accurate to blame Zionism. The Jews were largely non-Zionist. Zionism was not the cause of their departure, but it provided a solution to their precarious plight following the savage 1941 Farhud pogrom in which at least 180 Jews were murdered. After 1948, the Jews, even the Communists among them, had somewhere to flee to - the new state of Israel.

Even if Israel had not been established it is plausible that the Jews would have been driven out of Iraq, in the same way as the Assyrians, Chaldeans, Yazidis and Mandeans.

Virulent Arab nationalism must therefore take the lion's share of the blame for the demise of the Jewish community, as well as the persecution and exclusion of the other non-Muslim minorities.

That wave of nationalism has now been replaced by xenophobic, bloodthirsty, Jihadist Islamism.

We are now seeing the catastrophic consequences for Iraq's ancient Christian heartlands, whose inhabitants are fleeing in droves.

Crossposted at CiF Watch
Posted by bataween at Monday, June 16, 2014

Good point, have added them.

That man is reckless, and not only in matters of linguistics and identity.
Or perhaps he just craves attention.

But Lyn Julius is in good company, he regularly attacks Rabbi Marc Angel for not being Sephardic enough.

I'm sure Lyn Julius will be flattered by such choice nomenclature. I'm not sure that the passage he quotes from Nissim Rejwan's book proves anything at all.
It is not only Edwin Black, but eyewitnesses like Sami Michael, Zvi Yehuda, Shmuel Moreh and Salim Fattal who have testified to the Nazi influence over the Iraqis. Yes, we get Shasha's concern for the preservation of 'Arab Jewish culture', but no culture is any use when you're dead.

there is plenty of documentation for Nazi involvement in Iraq. Grobba himself wrote a memoir entitled Manner und machte im Orient [I have not read it as I don't read German]. Lukasz Hirszowicz used Grobba's book in his important work: The Third Reich and the Arab East [also in Hebrew translation]. Then you have Majid Khadduri's Independent Iraq [see both 1st and 2nd editions]. Khadduri was himself an Iraqi and knew very well what was going although he sometimes likes to play down or conceal unpleasant facts. Elie Kedourie wrote about the Farhud, etc. More recently, Martin Cuppers & Klaus-Michael Mallmann published Croissant Fertile et Croix gammee: Le III Reich, les Arabes et palestine. They write about the German supply of weapons to the Rashid Ali Gaylani govt in Iraq and the willingness of Vichy France to do the same [Admiral Darlan]. Both Hitler & Mussolini supplied weapons to the Mufti, Haj Amin el-Husseini, Cuppers et al. write.

Hence there is no shortage of sources and authorities on the matter of Germany and the Farhud and Iraq.
Also see at link:
http://ziontruth.blogspot.co.il/2011/11/seventy-years-since-arab-mufti-haj-amin.html

There will always be a good reason to hate us Jews. Just scan thru a history book.
Visiting Koln lately I found a plaque recording the Jewish community there. The latter were ousted because they were blamed for the Plague.I
have an enlarged picture of that plaque hanging in my hall