Saved by a liquor glass, betrayed by friends 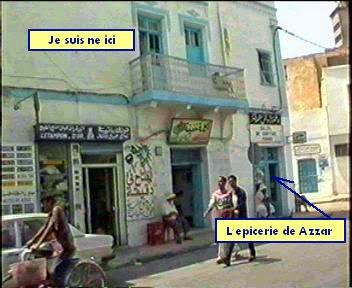 The grocer's shop owned by one of the victims of the Gabes pogrom, Avraham Bar-Shay's uncle Azzar. Bar-Shay was born on the first floor above


In the neglected history of Jews from Arab countries, 1941 is remembered  as the year of the (1/ 2 June) Farhud, the brutal Nazi-inspired pogrom against the Jews of Iraq, which claimed at least 179 lives. But a mini-Farhud also took place in Tunisia almost exactly 73 years ago, an event scarcely mentioned by Tunisian Jews eager to reminisce about their idyllic childhoods. Lyn Julius blogs in the Jerusalem Post:


In Tunisia too,  feverish pro-Nazi sentiment had spread. On 20 May 1941, the Arabs of Gabes, fired up by the propaganda of the Grand Mufti Haj Amin al- Husseini and the defeat of France by the Nazis, murdered seven Jews on the Place de La Synagogue in what became know as the Gabes pogrom.
Avraham Bar-Shay (Benattia) was there, and was almost murdered too, together with his father. The victims included his uncle Azzar and 10-year-old girl cousin."I recall being betrayed by our Arab neighbours, our colleagues and friends," writes Bar-Shay in Harissa, the Tunisian-Jewish website." Our existence as a minority was not always a tranquil one."
He researched the Harissa archives and found not one mention of the tragedy. Not many have even heard of it. So he put together an account based on three versions of events. He himself was only four years old at the time and does not have a clear memory of what happened.
Bar-Shay's parents told him that a hoard of excited Arabs had invaded Djara, the centre of Gabes. Among the seven killed were Bar-Shay's uncle Azzar Benattia and his 10-year-old daughter. His mother Gracia was left for dead, her skull bludgeoned open: yet she survived. Their house nearby was ransacked and looted. Bar Shay's 12-year-old cousin Nissim miraculously escaped with his life.
Among the pogrom's instigators were Azzar Benattia's best Arab friends. Benattia was known throughout the town as a great friend of the Arabs. It was said that he was a member of a party fighting for Tunisian independence. He lived amongst them and had adopted their habits. The Jews resented his anti-French Protectorate stance. Afterwards, the family said little about the tragedy. Some Jewish neighbours believed Azzar knew that a pogrom was being planned but failed to warn the Jewish community, believing that the unrest would be directed against the French.
France was under Nazi occupation and the Tunisian police force was under the yoke of the Vichy authorities. Some Arabs thought it was an opportune moment to take advantage of the colonising power's weakness. Bar-Shay's mother never understood why their anger was directed against the Jews,  why the community's closest Arab friends had betrayed them, or why the local police took hours to get there.
That evening, Bar-Shay was on his way to evening service (Arbit) at the synagogue, as he did every evening. His father would stop en route to have a glass of the popular Lagmi (fermented date palm juice) in a tavern.  This is where he heard the cries of Jews fleeing and seeking shelter at every open door.
"We threw ourselves to the ground and locked the doors until calm had returned. That small glass of liquor saved our lives," he wrote.
The family later made his father take over the running of Uncle Azzar's grocer's shop.
Thirty years ago, Abraham Bar-Shay had tried to glean more details from his neighbour in Haifa, the MK Avraham Tayar, who was also from Gabes. Tayar was evasive, leaving Bar-Shay with the feeling that his uncle had much to answer for.
Here follows the eye-witness account by Bar-Shay's 12-year-old cousin Nissim :
"Uncle Azzar was a craftsman and shopkeeper. In his grocer's shop he also practised as a tailor. He was a good-looking and well-built man. He mixed with Arabs more than with Jews. The criminals had even persuaded him to sew hoods for them.  He knew that they were plotting something, but did not know against whom. He did not warn the members of the community but he had armed himself well, prepared his family for trouble and locking them inside his home and bedrooms.  Nissim, Azzar's nephew, was also in the house. The uncle hid the children underneath the floorboards in the most secure bedroom, in the space where the winter bedding was kept.    Gracia, his mother, who had come to visit him that fateful day, removed her jewellery as soon as she heard the screaming, and ran to hide it underneath her grand-daughter.
"One of Azzar's friends, a pogrom leader, gently called out to him from the street, asking him to come and protect him from being attacked. When Azzar stepped out of the house, he was shot by a gunman with a revolver. As the front door to the house was hard to break down, an Arab neighbour brought an axe and broke the locks."

When the killers discovered the children, they bludgeoned the girl to death and wounded the others, looting the family's riches. Nissim managed to escape from the bedroom and ran from rooftop to rooftop, together with an aunt.  His fear was so great that he stayed (on the roof) until the following day. His parents believed him among the dead: Moshé Hakmon and his mother Mantina; Masou’d Raccah and his mother Assoulam (Afila?); The shamash of Djara Synagogue, Mévourakh Hagège; Azzar Benattia and his 10-year-old daughter Bahrya.

Assoulam Raccah was in her small kitchen, cooking dinner for her family when the gang barged into her home. They grabbed a pot of boiling soup and poured it over her, tortured her in her house, stoned her, and then killed her.
When the police were called they came unarmed and were in turn attacked and injured by the murder squad. Late that night, the assailants retreated, while the 'brave' policemen, then under Vichy control, got their own back, according to Nissim, by ransacking the synagogue and destroying its sacred objects.
Nissim later heard rumours that one of the culprits had wanted to avenge his family's honour. He suspected his Jewish friend, Uncle Azzar had a relationship with  one of their women.  The next day, the murderers' parents came to comfort the family and pleaded with them not  to give away the culprits: 'everything must stay between cousins.'

Nevertheless, the culprits were hunted down and a Jewish lady lawyer came from Paris to represent the victims. Nissim's father bore the costs. But Azzar's wife mis-identified one of the assailants and some were acquitted.
Following the pogrom, young Jews came from Palestine to prop up the community's youth movements, such as Betar, and teach them self-defence.
A third (Hebrew)  version of the pogrom by Irit Abramski of Yad Vashem*, based mainly on interviews with six witnesses, declares that the pogrom of 20 May 1941 was a serious incident without parallel in Tunisia. Several dozen men armed with coshes and knives had set out to massacre the Jews of the Djara quarter.
They massacred every Jew they could find in the street, looted Jewish homes and pillaged shops. In Abramski's version of events, they spared the synagogue.
Seven Jews were killed and 20 injured. One policemen was also killed. There would have been more victims had the pogrom not taken place at sundown. The shops had closed and the synagogue was almost empty between the Minha and Arbit prayers.
Arabs from Djara and Menzel assisted the Jews and raised the alarm, preventing the pogrom from spreading to other districts.
The police did not come until hours later, leading to speculation that the French authorities were not averse to creating a climate of antisemitism in Gabes. They played down the anti-French character of the disturbances while taking advantage of them to be rid of the worst nationalist extremists. Five rioters were sentenced to death. The Jewish community was formally banned from making a public show of burying its dead.
Robert Satloff in his book 'Among the Righteous' writes that the Vichy foreign minister ordered Admiral Esteva, the French resident-general in Tunisia, 'to find quiet ways to indulge Arab sensibilities.' Arab rioters who had been convicted of pillage were freed from prison.
The Jews were advised to accept their persecution quietly. They were blamed for their own misfortune.

In actual fact, the Gabes pogrom was not unique - it was the culmination of a series of disturbances. In August 1940, according to Satloff, the towns of Kef, Ebba, Ksour, Moktat, and Siliana were the scene of riots and pillaging against Jews, triggered by rumours that the Jews had kidnapped a Muslim girl.

Antisemitic sentiment rose further when the Jews were blamed for wartime shortages. Anti-Jewish riots erupted  in November 1940 in Degache and in early 1941 in Gafsa. All these episodes seemed to pale, however, in comparison to the direct occupation of Tunisia by the Nazis in November 1942. Hundreds of Jews were sent to labour camps and scores died.
In the Gabes pogrom, Irit Abramski emphasises that the culprits included Arabs that the Jews considered were good neighbours, customers or trading partners. A survivor called Youssef Mimoun recalls that Arabs who had broken bread together with the Jews on the eve of the riot, attacked them the next day.
Let that be a lesson for those who believe that the road to peace lies only through Arab-Jewish friendship and coexistence.

Read article in full
Posted by bataween at Thursday, May 08, 2014

it's the scariest story!
my mother too was betrayed b one of her staff.
My mother kept repeating "yekhreb betak ya Nasser"
may your house be ruined. Then what was to happen, heppened. The police came home and arrested her dragging her to their car!
However we were friends with a superior officer and he released her that very day.
sultana

It is also true that Arabs helped Jews

Though they have largely been the exception rather than the rule, even then since the establishment of islam their unreliably and betrayal towards the Jewish people during that time has been very consistent for it to be dismissed.