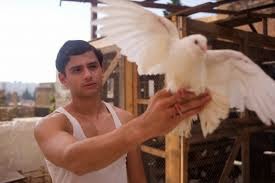 
The Jewish community of Iraq is the main protagonist of "Farewell Baghdad" (also known as 'The Dove Flyer'). Nissim Dayan's film with its  dialogue in Iraqi-Jewish Arabic is always interesting, although a bit scrappy, concludes Uri Klein in this Haaretz review.

In “Farewell Baghdad,” director Nissim Dayan has undertaken an especially difficult task: not only to translate Israeli author Eli Amir’s novel, with its many plot lines and characters, to the screen, but to portray the end of an entire Jewish community – Iraqi Jewry, once the most ancient Jewish community of all. The fact that he pulls this off, despite certain weaknesses in the screenplay and film, is an admirable feat.

In many ways, “Farewell Baghdad” is one of the most presumptuous Israeli pictures ever made, and I say this as a compliment. Few Israeli films to date have attempted an epic broadness; most, even those set in some remote past or location, have focused on a private story and used it as the basis for a broader statement about the surrounding collective.

“Farewell Baghdad” does have a main character, 15-year-old Kabi, the son of a respected Jewish-Iraqi family. But the main protagonist is the community itself, out of which the movie projects specific characters and story lines. The fact that Dayan’s film goes from the collective to the individual instead of the other way around is both the source of its strength and the cause of certain flaws within it.

The year is 1950. Zionist activists within the Baghdadi Jewish community are persecuted by the Iraqi authorities, imprisoned and even hanged. Communists are likewise in the regime’s crosshairs. The Jewish community, which has deep social, cultural and economic roots in the country, is under constant threat of pogroms, and although some among them refuse to admit it, the Jews of Iraq become increasingly aware that their world is coming to an end.

What sets the plot in motion is the arrest of Kabi’s uncle, a journalist who published an article protesting against the authorities, and the efforts made by Kabi (Daniel Gad) and Rachel (Yasmin Ayun), the uncle’s wife, to find him and have him released with the help of a family friend, a Muslim lawyer (Ron Shahar).

This story line allows Dayan to introduce a great many characters representing the different parts of Jewish-Iraqi society at this moment in its history, while also showing us Kabi’s own growing involvement in the fateful predicaments his family and community face.

What Dayan tries to do throughout “Farewell Baghdad” is impressive; the result, however, does not meet his goals in full, stumbling between the plot and the effort to put that plot in an analytical historical context. We are aware of the ideological factions within the Jewish community: there are Zionists, anti-Zionists, communists (who are also opposed to the Zionist vision), and some who don’t belong to any of these groups and ignore what is about to happen.

The film, however, does not give us enough historical and ideological background to understand these differences, and it therefore seems at times like a patchwork of scraps – scraps of ideas, scraps of plot, scraps of historical information. These do not always fit together well and even generate a certain amount of vagueness and confusion.

There are many lovely, impressive scenes, and Dayan puts his large and talented cast to skillful use; but the movie’s components seem at times to be superior to the whole they comprise, although that whole never stops being interesting.

“Farewell Baghdad” is only the fourth long feature film that Dayan has directed. His small oeuvre and 30-year absence from filmmaking (since “Gesher tzar me’od” in 1985) are one of Israeli cinema’s most unfortunate missed opportunities, and his return to the screen is a happy development that, I hope, will soon continue.
(...)
The style in which the new movie is directed is correct and respectable; though a bit heavy at times, it demonstrates throughout the knowledge, intelligence and decency of the director, who is also a teacher and film critic. Perhaps it was my earlier acquaintance with Dayan and his work that led me to expect a more precise balance between the narrative, which sweeps us into the movie, and the analytical level, which pulls us back from it. That kind of balance would have exposed the dialectical nature of the historical reality we see before us; expecting it is what caused me to feel a certain disappointment with the result.

One of the best and most courageous decisions Dayan made in the film was to have the characters all speak Iraqi Arabic, which adds a distinctive flavor. The movie also wisely avoids any hint of folklore, a problem that stumped many previous Israeli films about Jewish communities in Arab countries.

The Dove Flyer film flies high
Posted by bataween at Sunday, May 04, 2014

It is interesting to note that unhappiness and problems can generate works af great interest
As we grow older we feel the need to tell our story and that of our community
Neitch says anything that does not kill you, makes a man out of you
You know that if I look back on all the unhappiness we jews havE suffered, I think we are STRONGER NOT NECESSAILY WISER
SULTANA

This day, a LARGE meeting of Jew haters will take place in BXL!
Is it possible that history has not seen enough hatred and the consequences?
sultana