The tenth man - and his sister 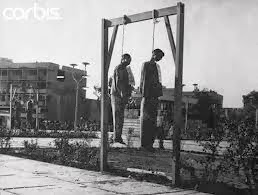 Nine Jews were hanged in Liberation Square in 1969, but Jamal Hakim is not counted among them

Every person has a name, and tradition obliges Jews to remember their name when they die. In the case of the nine Jews hanged in Baghdad's Tahrir (Liberation) Square, 45 years ago, and dozens of others who disappeared without trace, their names are memorialised at the Babylonian Heritage Centre in Or Yehuda and at another monument in Ramat Gan, Israel.

But there was a tenth man. His name, Jamal Hakim, does not figure on any list. He was 18 when he was hanged - too young to be executed according to Iraqi law. The regime falsified his age. Presumably he is included among the five Muslims and Christians also executed on that fateful 27 January 1969.

Jamal Hakim had a Jewish father and a Muslim mother.  As often happens with mixed marriages, the family cut off all contact with Jamal's father, who moved away to Basra. His Jewish relatives had no idea of Jamal's existence, until they saw the terrified youngster appear in a televised show trial just before his death sentence was passed.

But there is worse. A Jewish prisoner, who consoled the distraught Jamal but was spared the cruel fate meted out to him and the other victims, says that Jamal had a sister who was also thrown into jail. She was beautiful. One can only imagine the abuses she was likely to have suffered. The Hakim family have no means of discovering her name or her fate.

For Miss Hakim there is no memory, no remembrance. Barring a miracle, she will remain faceless and nameless.

Forty-five years since the Baghdad hangings
Posted by bataween at Sunday, February 09, 2014

It's a bloody shame!
We should remember them in our prayers.
Just today i was watching the Battle Stalingrad. The Germans claimed that their defeat was due to the Jews who etc etc etc.That is why we should stand IsraelIt's a small country but awesome!!!
sultana

Sultana, Sadat wrote something like what you attribute to the Germans. It might make you proud of the Egyptian Jews. In his book, Revolt on the Nile [Revolte sur le Nil], he complains that a plot by his and Nasser's Free Officers group to help the German invaders of Egypt in cooperation with Rommel's army, was discovered and various plotters arrested, including himself. He blames Egyptian Jews for discovering the plot and informing the British. He then speculates that if the plot could have succeeded and General Abdul-Aziz al-Masri had reached the German army, the Afrika Korps, then perhaps the German invasion of Egypt would have succeeded and the Germans could thus have used the victory in Egypt to win the war. He regretted that Rommel and hitler had lost the war.