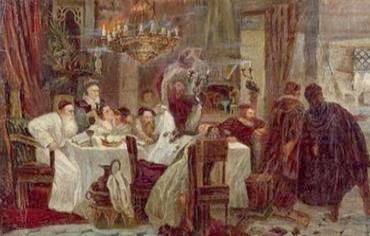 A secret seder during the Inquisition, by Moshe Maimon

Reports that Spain had passed legislation granting citizenship to Sephardi Jews ( and therefore access to the EU) residing anywhere in the world were premature, representatives of the Spanish Jewish community told The Jerusalem Post. The draft bill would allow dual nationality and does not require residency, only proof of Sephardi ancestry.

It was reported on Friday that the Spanish government had approved a law allowing descendants of Sephardic Jews expelled from the country in 1492 to seek Spanish nationality without giving up their current citizenship.

“The law we’ve passed today has a deep historic meaning: not only because it concerns events in our past of which we should not be proud, like the decree to expel the Jews in 1492, but because it reflects the reality of Spain as an open and plural society,” Justice Minister Alberto Ruiz-Gallardon was reported as saying.

The minister also asserted that his nation owned the Sephardic community a debt for spreading the Spanish language and culture around the world.

The word Sephardic comes from Sefarad, Hebrew for Spain.

However, Friday saw not the passage of a new law but rather the approval of a draft bill that the government hopes to see passed by the legislature.

A spokeswoman for the Federation of Jewish Communities of Spain told the Post that she believed it was “very important that the media get the story right in order to avoid a run on consuls around the world by people seeking Spanish nationality.”

Friday’s draft has to be presented to Congress and then to the Senate and then back to Congress. The text may also be modified during this process, which is expected to take several months, she added.

What's in a Sephardic name? Sometimes an Ashkenazi. Take Shimon Peres for example. I haven't seen that list, but I am prepared to bet that name is on it. In reality, Shimon Peres' real name is Persky or Paretsky and he is originally from Poland.So obviously the family name is not enough to satisfy the requirements.

How, then does one proves that one is Sephardi in a way that would satisfy the Spanish Jewish federation?

Here is some information that might surprise some of you.

There are communities that have maintained throughout the centuries, the religious customs of their Spanish province of origin (Castile, Aragon, Catalogna), and those who left from Portugal, (the Spanish-Portuguese)to which we must add the "Livornese", a mixed bunch also called Grana or Francos who spread around the Mediterranean England and the West Indies. These communities maintained some differences with the Jewish populations they found in their new countries. The major differences concerned family law, marriage, succession, inheritance, with slight differences in some customs.

The Ketouba for example, often mentioned that the marriage was performed according to the Minhag of the Spanish province of origin.

Those documents are of course either in the hands of the families or archived wherever the community of origin is if it is still functioning or they were taken elsewhere. In addition, the Rabbis who led those communities of Megurashim throughout history are known to the Spanish Jewish Federation. You get the idea.

There were communities big or small, in practically every Muslim land, in Western Europe, England) and America. The largest communities who maintained both language and halakhic customs were those who originated in Turkey and in Morocco.

In Turkey there were many different Spanish rites though there were also many Ashkenazim as well as Toshavim who ended up speaking ladino.

In Morocco there were only two communities: the Toshavim or original Jewish inhabitants, and the Castilians (sorry, no Arabs). Haquetia The Castilians dominated at one point in the coastal towns and they imposed their form of worship and their medieval Spanish language, haquetia.
By and large, if you are from anywhere in Morocco between Safi and Spain, you may have a claim to Spanish citizenship. Another advantage is that the community in Casablanca has maintained a databank of sorts.

In Algeria, there were communities in Oran, Tlemcen, and other places, the "Tetouani" of Oran are also of the Castilian rite. In Tunisia, though the majority were Twensa (equivalent of the Moroccan Toshavim, there were pockets of Sephardim who sometimes joined the Livornese synagogues.

In Iraq, Syria, Eretz Israel Egypt, there were Sephardic communities though given the multiplicity of the "Edoth, they couldn't have been in very great numbers. In Israel, the Sephardim were subdivided into countries of origin (Moghrabi, Bukhari, etc).

Fascinating, thanks.I wonder why the Arabs never continued speaking Spanish after their expulsion from Spain?

But they did. I think it was Mouette the 17th century French captive in Morocco who wrote that in most cities, Spanish was spoken in the streets.

As you go East, the influence of Arabic is stronger so the Spanish is less present.

And to this day, the Maghreban dialect, despite centuries of Arabization, still contains many Spanish words and sometimes even Spanish syntax. The Jews, less exposed to the Arabic language than Muslims, have preserved many more of those Spanish words.

The striking difference between the Muslim and Jewish exiles is that even though they may have been expelled from Christian Spain, the Spanish Muslims preferred to call themselves Andalusian. Where Jews, even the Andalusians among them were absorbed by the later Castilians.

Miami woman tracks down her Jewish roots in Spain 15 generations through her maternal line, but after writing the book, continued burrowing backward, past the years of the Inquisition and 1492, when the Jews were expelled from Spain. She has now tracked 22 generations of her mother’s maternal line and unearthed centuries-old documents about both her family and Fermoselle as a Jewish settlement.
--Malca

@Sylvia : I am sorry dear but it's actually Arabic that influenced the Spanish language (and therefore the Ladino dialect), and not the other way around. The only Spanish influence there is in Moroccan Arabic is from the Spanish colonization over Northern Morocco and the Western Sahara. Actually the Muslim andalusian were totally absorbed by the local Muslims, while for the Jews, it was the other way around, the Megorashim from Al-Andalus absorbed the local Moroccan Jews and created a blend between North African, Middle Eastern and Andalusian culture. But what the article does not say, is that many Sephardim are actually Maghrebim Tovashim who immigrated to Al-Andalus during the Golden Ages.