"It's only bricks and mortar," the late Israeli Prime Minister Menahem Begin told Roger Bilboul's father on a visit to Egypt for the signing of the Egyptian-Israeli peace treaty. He was referring to the Jewish community's abandoned synagogues, but Roger, who is active in the Nebi Daniel Association for the preservation of Egypt's Jewish heritage,  has a different view. Here is a summary of a talk he gave last week in London:

A recent Jewish visitor to Egypt bought a 1941 telephone directory of the city of Alexandria. Naturally, the Jews were disproportionately represented in a country where the vast majority could barely read or write. The Jewish names comprised 7 percent of the city's total - merchants, bankers, industrialists, shopkeepers. One was a manufacturer of artificial eyes. Interestingly, the offices of the Zionist movement were listed openly.

Where there were once a thriving community of 80, 000 in Egypt - today you would find five Jews in Alexandria, and these might even be too fearful to have their names included in the 'phone directory.

Cairo has 13 synagogues, one for every Jew in the city. There is no rabbi, no communal life to speak of, no money in the collective kitty.  Alexandria has five bona fide Jews: 10 ladies in all. One or two, wearing Muslim headscarves, collect a stipend from the community offices. In spite of its severe lack of headcount, Alexandria is relatively rich, having sold off all but two of its synagogues and communal buildings. Its cemeteries are reasonably well tended.

Last April, the Cairo community lost its octagenarian leader, Carmen Weinstein. She was a law unto herself with a good nose for public relations.  She kept such tight control over the community's affairs that the store where she kept her documents had to be broken into after her death. She left no plan for her succession. Carmen was buried in the Bassatine cemetery, where vandalism and squatters are endemic and sewage runs past her grave. So often had vandals tried to break into her parents' mausoleum that Carmen erected a wall around it. Even she could not visit their graves after she had the access door bricked up. 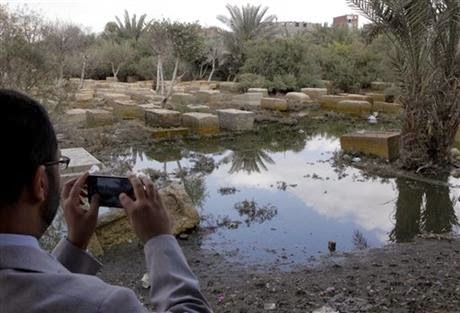 After her death Carmen's (non-Jewish) boyfriend tried to take over the community but the two Haroun sisters, Magda and Nadia,  won the leadership contest. Already their style is quite different from Carmen's - more outward- looking and media savvy.  But they are determinedly following in their father Shehata's anti-Zionist footsteps, distancing themselves from any contact with Israel.

The challenge in Cairo now is to support the surviving Jews financially and to make sure more of the city's synagogues do not fall into rack and ruin - only five have preservation orders. 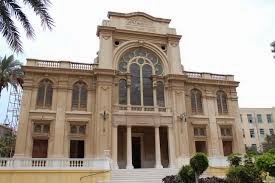 The Eliyahu Hanavi synagogue ...in dire need of repair

In Alexandria, the Eliyahu Hanavi synagogue is in dire need of repair, and in the absence of Egyptian government help, an application has been made to the World Monument Fund for a £50, 000 grant. An £ 800, 000 restoration programme has been put on hold since the Egyptian revolution.

In fact the revolution has stymied any progress to persuade the authorities to spend money on Egypt's Jewish heritage or release communal records. Egypt has had seven ministers of Antiquities in the last two years.

Carmen Winestein was the one who made our roots'trip fail. Sorry I cannot throw jasmine on Carmen but it is so. We were a large group of Egyptian Jews who had registered for that trip, some coming all the way from the US.The next thing we knew was that we were persona non grata in Egypt, some had come all the way from theUS/ Fortunately I had a very good insurance but some had taken their tickets and reserved the hotel but had no insurance so their money w<as not given back Carmen also spread the rumour that we Egytian Jews were coming to Egypt to claim compensation for what we had left when leaving. you can ask Levana if you like!
So that was Carmen for you!
sultana