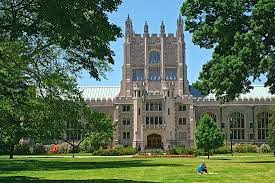 No cool campus group spoke up for Jews from Arab countries in the 1970s - or now - writes Cairo-born Lucette Lagnado, an alumna of the Seven Sister college Vassar (pictured), where Jewish students have called for a boycott of academic exchanges with Israel. Read her piece in the Wall St Journal (with thanks: Lily):

Recently I was contacted by a fellow Vassar alumna through Facebook. She wanted to know if I was aware that our genteel alma mater had become a hotbed of anti-Israel, pro-boycott sentiment.

Suddenly, my stomach was in knots—a feeling that Vassar has managed to evoke in me ever since I went there in the 1970s. An Orthodox Jewish girl from Brooklyn on a full scholarship, I fixated on this Seven Sister school as my entryway to the American dream, the epitome of style and grace that also prided itself on teaching "critical thinking."

In this case the cause of my angst was a young woman named Naomi Dann, the president of the Vassar Jewish Union. She had penned a piece for the campus paper strongly supporting the recent move by the American Studies Association to boycott Israeli academic exchanges—a decision denounced by college presidents across the country, including Vassar's.

Her piece strung together all the familiar buzzwords and clichés used by Israel's critics: "atrocities," "oppressive," "abuses," "colonial," and, of course, "apartheid." Signed jointly with the co-president of Students for Justice in Palestine, Ms. Dann even slammed Vassar's president and dean of the faculty for daring to oppose the boycott against the Jewish state.

There was more to fuel my Vassar angoisse. The head of the Jewish Studies Program, a professor named Joshua Schreier, had also expressed support for the boycott movement. Prof. Schreier was quoted in the campus paper ruminating that while once "instinctively against" the boycott, he had heard more "substantiated, detailed" arguments on its behalf, and as a result "I am currently leaning in favor of it," he concluded delicately, as if choosing a flavored tea.
As for Vassar's rabbi, Rena Blumenthal, she was MIA—on leave in Israel, no less—and emailed to say she couldn't weigh in from afar. Huh?

To be sure, I had been aware that the Boycott, Divestment and Sanctions (BDS) movement had taken off on some college campuses, even in the Ivy League. It had become chic to attack Israel even—especially—if you were Jewish. I heard from an alum who was stopped by his own child, a Vassar student, from taking a public stand against the BDS movement. The student was fearful of being ostracized for having a parent who supported Israel.

Suddenly the toxic essence of this movement to make Israel and its supporters pariahs in the groves of academe and the cocktail parties of polite society hit home in a way it hadn't before. It also brought back painful memories about my own Vassar experience, and the shattered illusions that had marked it.

I had gone to Vassar a naïf, a sheltered girl from an immigrant community. Mine was a neighborhood of Jewish exiles thrown out or pressured out of Arab countries in the 1950s and 1960s—in my family's case, Egypt. We were victims of the Middle East conflict who were barely mentioned in the history books.

Though we had been mistreated and denied our homelands, we suffered alone and in silence. No cool campus groups spoke up for us then, or now.
(My emphasis - ed)

Our values were God, faith, family and Israel. We were passionate about the Jewish state, a country that took so many Middle Eastern Jews in when, one after another, Arab countries had forced or pressured us out. I was raised as a Sabbath observer, a keeper of dietary laws, and, oh, expected to marry young and refrain from sex before marriage.

Those were the quaint values I carried to Vassar, which I had chosen from among a multitude of schools for the old-fashioned ideals its name evoked. I had read a brochure alluding to a tradition of students drinking sherry with faculty. To someone more familiar with Manischewitz wine, sipping sherry with my professors epitomized what I wanted on this earth: a life of civility and grace. This was Jackie Kennedy's Vassar.

Instead, I found myself on a campus in the throes of a 1970s rebellion. There was a drug culture and a drinking culture, but no sherry culture I could find. Vassar prided itself on being edgy and embraced open sexuality and every other cause of the tumultuous era.

My disillusionment came fast. My first day I wandered to the "ACDC"—the forbidding central dining hall—and timidly asked a manager where I could find the kosher section. She looked at me as if I were from another planet.

What followed were months of kosher TV dinners, in big aluminum packages. It was incredibly decent of Vassar to obtain those for me, yet every time I lugged one these dinners from the kitchen to the table in their silver foil, I felt the stares of my fellow-diners.

It never got easier. I could never take that train from Grand Central back to Poughkeepsie on Sunday nights without the blues setting in. And now, so many years later, my Vassar blues were back.