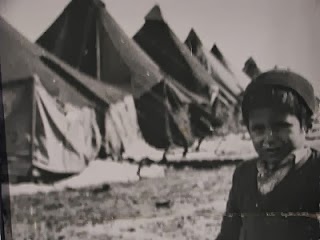 
Pop the champagne corks: a landmark article in the influential Economist spotlights the issue of Jewish refugees from Arab lands, possibly the first of its kind within living memory. It was prompted by the news that the Kerry peace framework is likely to include a clause compensating Jews who fled Arab lands for their lost property. (With thanks: Ronnie)

Much as Palestinian refugees and their offspring remember the orange groves and cinemas they lost in Jaffa when Israel was born in 1948, Jews who once lived in Iraq recite the qasidas—lyrical Arabic poetry—and recall the time when most of Iraq’s banks and transport companies were run by Jews. “Iraq has gone downhill since they forced us out,” sighs a professor at a gathering of academics of Iraqi origin at Or Yehuda, a Tel Aviv suburb, slipping into Arabic. “Mubki, lamentable.”

American officials are unclear on the subject of whether they have formally raised the issue of Jews driven out of Arab lands as part of their proposed framework to establish an international fund to compensate Palestinians who fled the new state of Israel in 1948. But leaders of Israel’s Sephardic Jews (most of whom came from Arab lands) criticise their own negotiators for not raising the issue more forcefully.


“Why does Israel ask for compensation for Holocaust victims but not for the Jews from the Arab world?” asks Levana Zamir, leader of an association for Egyptian Jews in Israel. “Because our leaders are Ashkenazi [European Jews], and we are Mizrahim [Orientals],” she says. “We had another kind of Shoah [Holocaust]. A million Jews [from Arab lands] lost everything.”

Tzipi Livni, Israel’s chief negotiator, an Ashkenazi, fears that adding such topics could complicate to distraction efforts to resolve matters arising from Israel’s occupation of the Gaza Strip and the West Bank after the six-day Arab-Israeli war of 1967. For some Israelis, that may be just the idea. Binyamin Netanyahu, Israel’s prime minister, has repeatedly raised the issue, apparently to offset any claims for compensation from the Palestinians uprooted in 1948, 750,000 of whom fled abroad and 150, 000 of whom were displaced within what became Israel. Mr Netanyahu’s ministry for senior citizens has opened a hotline for claimants to register lost property in the Arab and Muslim world (including Turkey and Iran), which, campaigners argue, will exceed the price-tag of between $20 billion and $100 billion which Israeli officials privately put on Palestinian claims.

Palestinians are as sceptical as Ms Livni about recognising a Jewish nakba (or catastrophe, the word Palestinians use to describe what happened in 1948). It would merely add more knots, they say, to the tangle of negotiations. In any event, Israel’s Zionist leaders promoted the idea of Jews finding their real home, thus never considering them refugees. To bolster their fledgling state, they sent agents from Mossad, their foreign intelligence service, to “ingather” Jews with airlifts from the Arab world. Fearing another post-war slaughter, Zionist spokesmen campaigned for “their quick transfer…to the new Jewish state”, as the New York Times reported at the time.

Despite the complications, though, a compensation scheme for Israel’s Mizrahim could give the negotiations a political boost. Making up an estimated 55% of Israeli Jews, Mizrahim have tended to vote for right-wing parties loth to cut a deal that would bring about a Palestinian state, partly because they still harbour grievances over their own dispossession after 1948. Turning them into stakeholders could raise the number of Israelis voting for a settlement in a referendum.

“Of course, we would support it, if our rights are recognised,” says Shmuel Moreh, an Iraqi-born professor of Arabic literature at Israel’s Hebrew University, who forsook his Baghdad home laden with silver chandeliers for a tent in Or Yehuda, when the suburb was just a muddy camp for Jewish exiles.

Read article in full
Posted by bataween at Friday, February 14, 2014