Compensation is a foolish sweetener 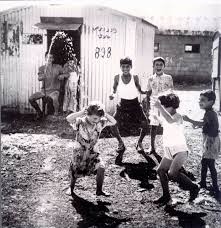 Compensation for both Jewish and Palestinian refugees is on the cards, if recent leaks of what the Kerry framework peace deal will look like are to be believed. Yaakov Ahimeir in Israel Hayom takes issue with the idea of including compensation in the peace settlement.

Is this comparison the intention of the American deal-makers? What might be the hidden intention of loosening the purse strings in the name of monetary compensation for Jewish refugees with the signing of the Israeli-Palestinian deal?

No, this is not a reaction to an agonizing demand weighing on the conscience of the American broker, insisting that Jewish refugees also be compensated, just like the Palestinian refugees. It could be that this new awakening to the importance of paying compensation to refugees from Arab countries is meant to win hearts and support ahead of achieving an Israeli-Palestinian deal. It may be that the blossoming of this idea, now, 60 years after they arrived to Israel, is meant to entice them to support a deal that will definitely include several bitter diplomatic pills.

We've all heard from the "experts" the prejudiced, even vaguely racist and elitist, belief that Jews from Arab countries do not trust Arab leaders. Therefore, raising the idea of compensation for refugees from Arab countries may be an attempt to recruit support for the deal from more and more Israelis.

Is there anyone at the State Department in Washington who fears that the same segment of the Israeli population that experienced life under Arab governments may link their suspicions and doubts to the trust being afforded to the Palestinian side? It is also possible that this line of thought, of trying to influence public opinion through compensation, is nothing but foolish.

Israeli governments over the years have not raised a loud and forceful voice demanding compensation for those who arrived from Arab countries. They are truly entitled to compensation, and not as a clause in a peace agreement. The time for paying compensation should have begun decades ago, and not now, as an American attempt to garner support for an agreement that may or may not be signed.

More than that, just "Promise of compensation is a foolish sweetener". Yaakov Ahimeir assumes it will materialize.

To be truthful, it crossed my mind that the kind offer by the Spanish has to do with the peace process. Let's not forget that Spain's Moratino was for a long time European envoy. This could have been his idea.

some folks may be surprised to learn that US foreign policy can be extremely cynical. As a blatant illustration of that consider the caustic remark by one Victoria Nuland [Assistant Secretary of State] about the EU [my wife informed me that Nuland was not being ladylike -- so I will not repeat it for the sake of the ladies here]. That's how the Americans talk in private. Including the State Department functionaries, as it turns out from Ms Nuland's crude outburst.

So Ahimeir and Rabbi Nissim Zeev and others may be very perceptive about the true American motives for this ostensibly generous demarche in favor of compensating both Jews and palestinian Arabs.

Now, among the most cynical of Americans is the one whom the Americans call the POTUS, the President of the United States. It would be hard to be more cynical than Obama himself. Recall how he vehemently insisted that he was going to stop Iran from getting The Bomb? Or how he promised that his "health care" plan would improve the health care of Americans, whereas in fact his plan has made things worse for most Americans?
There is an old adage: Beware of Greeks bearing gifts. Substitute the word Americans for the word Greeks.

Sylvia and Eliyahu -- another very cynical American politician for sure, but wasn't compensation of Jewish refugees also raised by Clinton back when he was pres?

Compensation was in the Clinton plan, and rightly so. But Livni said unequivocally that it wasn't in the initial plan, and that it was irrelevant. But now it is included? Why?

As to what I said about the Spanish citizenship related to the peace process, it appears that it wasn't so (my comment at "Anti-semitism in Turkey".