Compensation for Jews is 'remarkable' 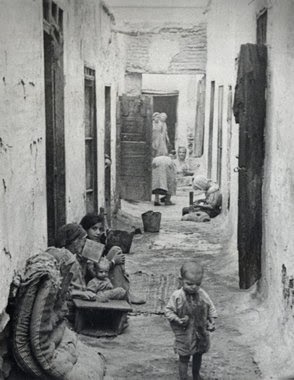 
Veteran reporter Ben Barber, in this McClatchy report, recalls his visits to Morocco and Iraq in the 1960s in search of the remaining traces of Jewish life. ( The main exodus from Arab lands actually took place well before.) The Kerry proposal to compensate Jewish refugees for their losses is 'remarkable':

These Jewish communities had been deeply rooted for centuries: in Morocco, Algeria, Tunisia, Libya, Egypt, Yemen and Iraq; they predated the rise of Islam in the 7th century.

Indeed, in 1965, before the Jewish flight took place, I first visited the Moroccan Jewish neighborhoods known as the "mellahs" in Rabat and in Marrakesh. I met Jews wearing traditional gelaba cloaks and yellow Moroccan slippers. Some spoke little Arabic or French but still spoke the Berber language that predates the Arab conquest.

During my visit back then, I shared the Passover seder meal with Rabat Rabbi David Cohen and learned that many Jews were quietly seeking to leave and head to France or Israel.

At that time, King Hassan II wanted the 300,000 Moroccan Jews to stay put and he sent his son, now King Mohammad Sixth, to a synagogue on the Jewish New Year to convey the royal family regards.

But after Jewish forces routed Arab armies in the 1948 war for independence, and then in 1955 wrested the Sinai Peninsula from Egypt, anti-Jewish sentiment spread. Already in 1965 the Moroccan synagogues no longer had any marker or mezuzah in front. Jews quietly left their homes and businesses and took small boats across the Mediterranean to escape.

After the 1967 victory by Israel over Egypt, Jordan and Syria in the Six-Day War, anti-Jewish riots and pogroms took place across the Arab world. The floodgates of refugee flight had opened and rulers from Cairo to Baghdad arranged for Jews to sign away their land, homes, businesses and other property before leaving.

In Basra, Iraq, in 2003, I noticed some curious adjoined housing along a canal and was told "that's where the Jews lived for 400 years" before they vanished from Iraq, mostly ending up in Israel after 1967. Only one Jew remained in that ancient city. On my flight out of Iraq I sat next to a Christian clergyman who told me he was helping to provide food and medicine for the last Jew in the city - an elderly Jewish woman.

The treatment of the two refugee communities has been markedly different and the suggestion that someone - U.S., UN, EU or perhaps multinational banks - might propose compensation to the Jews is remarkable.

Read article in full
Posted by bataween at Friday, February 14, 2014

"At that time, King Hassan II wanted the 300,000 Moroccan Jews to stay put and he sent his son, now King Mohammad Sixth, to a synagogue on the Jewish New Year to convey the royal family regards."

If "at that time" refers to 1965, the year the author visited Morocco, the above is impossible since King Mohammed VI was only two years old at the time.

Barber's history is a little shaky.

1955 is certainly very far off! But the hatred for us did not subside.On the contrary it has grown!!
More and more Europeans shet tears for the Arab refugees and now (just a few minutes ago)) I learned that Jews were going to build a Jewish religous school!
Of course Jews can do what they want in their own country but just you wait and see the wailing.
sultana