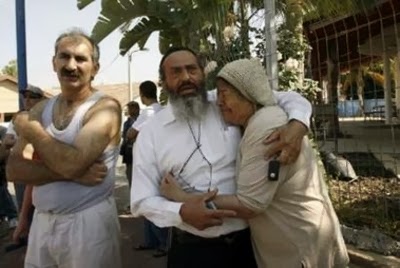 Sderot's residents terrorised by Hamas rockets. Most are refugees from Iran, Morocco and Kurdistan.


It's Israel Apartheid Week. The smear is being refuted by a grassroots counter-campaign called Rethink2014, videos and articles. But few rebuttals get to the heart of the issue like Lamia's eloquent comment on Harry's Place.  I am reproducing it here:

Although I think it makes very good practical sense, I don't see any compelling moral reason why Israel should give the Occupied Territories back. They won them in wars that they did not initiate, by people who waged those conflicts as wars of extermination with the intent to completely destroy Israel and drive the Jews of the mandate into the sea, into dhimmitude or into the grave.

If, in trying to burn down your neighbour's home in order to make him have nothing, you start a fire that leaves his house standing and your own destroyed, then whose fault is that? Yours, not his. The Arabs are to blame for their misfortune, because they wanted for themselves to have everything and the Jews to have nothing.

It was Arab spite and greed, honed on centuries of treating Jews as lesser human beings than themselves, that made them overreach themselves against Jews who finally fought back and kicked their lordly arses.

If the Arabs had won, that would have been a case of winner takes all, with the few remaining Jews living as a second class citizens again. And we wouldn't have today's 'anti-Zionists' complaining about the 'Arab-occupied territories' and apartheid. They'd have been either gloating or shrugging about the fate of the Jews of the Middle East for decades.

This isn't speculation. It's born out by the fact that there was a massive persecution and expulsion of Jews by Arab countries (and Iran) around this time - and yet 'anti-Zionists' have never shown the slightest concern, let alone outrage, about the plight of those Jews, or the injustices done to them.

Their blank indifference testifies that for such people there is no injustice in hundreds of thousands of Jews being hounded out of the country of their birth or forced to live as inferiors. For these supposed humanitarian opponents of injustice and racism, when oppression, persecution and expulsion happen to Jews in the Middle East, well that's just the natural order of things.

They've had decades to register a protest about this, but they have not bothered. If they ever make any mention of such people, it's to falsely characterise and denounce them as 'European colonialists' if they have sought refuge in Israel.
Take for example the city of Sderot, constantly attacked by Hamas rockets. Most of the population are of refugee origin from Morrocco, Iran or Kurdistan. Yet those people are characterised by 'anti-zionists' as 'colonialists' - or more probably 'western colonialists'. No mention is made of where they actually came from or why.

Well if Arab countries and Iran hadn't been so keen to make life unbearable for the Jews of their countries then:

a) they would have a more believable claim that there is no need to have a Jewish state and that Jews could live as equally as Arabs in the countries of the region.
b) those refugees wouldn't have had to go to Israel and swell the population there - and remain there because the Arab countries are as intolerant as ever. Some of them won't even allow a single Jew back in.

The haters of Israel, both Arab and non-Arab, should be forced to explain where they would prefer those people to live and why, and why there really is no necessity for Israel to exist as a Jewish-majority state and that a one-state, tolerant, democratic Palestine is both just and likely.

History shows they have nothing at all to back up such a claim, and thus no reason at all why anyone should believe any promise that this time they really will treat Jews as their equals rather than as lesser human beings.

In the Apartheid Oscars, Arabs win hands-down
Posted by bataween at Friday, February 28, 2014