What's left of a culture's heart and soul 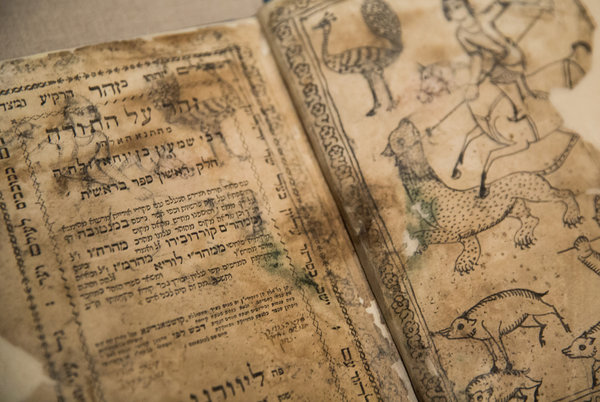 
When the 'Iraqi-Jewish archive', now on display at the National Archives building in Washington DC, was first discovered under four feet of fetid water, the recovery team were told that a seventh century Babylonian Talmud was in the cache. It was never found, probably looted. In the second article on the topic in The New York Times, a medium not used to treating Jews as victims, Edward Rothstein sees the exhibition as evidence of how far this once-glorious community had fallen: (with thanks to all those who emailed me about this article):

(...) This cache really should not be called the Iraqi Jewish Archive, as the National Archives refers to it. That title implies a systematic collection. Actually, as is clear online, it is a miscellaneous assemblage of treasures and trivia, incorporating legal documents and prayer books, office correspondence and Hebrew calendars. What, then, was it doing in the intelligence services’ basement? And what will be its fate? 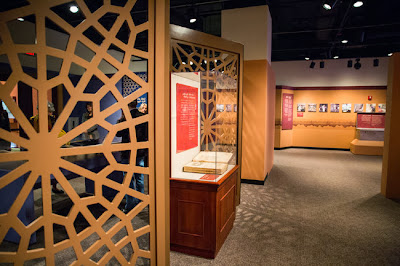 An installation from the Discovery and Recovery exhibit

Historians have yet to explore these materials fully, but the impression from the exhibition and from surveying the 2,000 documents online, is that very little intelligence was involved in this gathering of intelligence. It seems as if items were indiscriminately taken from every variety of Jewish institution.

Dissertations, newspapers, textbooks, rabbinical literature and telephone books were pulled from hospitals, schools, community organizations, libraries. We may be seeing a classic anti-Semitic doctrine at work: the belief that the very transmission of Hebrew texts is evidence of a dangerous cabal.

Items in the collection may have also been seized for psychological effect, as suggested by Harold Rhode, a Pentagon analyst and an adviser on Islamic affairs for the secretary of defense from 1995 to 2010, who was present at the cache’s discovery and instrumental in its rescue. In an online account, Mr. Rhode argues that part of this collection moved with the shrinking Jewish population, until it was stored at the last synagogue in Baghdad. In 1984, Mr. Hussein carted away the cache; the purpose, Mr. Rhode suggests, was to humiliate the city’s remaining Jews.

This exhibition illustrates how far they had already fallen. The rare, centuries-old volumes on view testify to a Jewish community that was once worldly enough to afford such texts, yet keen to study them, feeding on a spiritual tradition of fervor and seriousness. As this show reminds us, the Iraq region is where the tombs of Daniel, Ezekiel, Ezra and Jonah are found, where the Babylonian Talmud was compiled, and where great Jewish academies were established in the first millennium.

We see, too, that Iraqi Jews were often prosperous, despite their secondary status under Islamic rule. In the 20th century, some Iraqi Jewish businesses became international. (There is a 1920 letter from David Sassoon & Company in Bombay.)

It is tantalizing to learn that the military team was initially told that a seventh-century Babylonian Talmud was in the cache; it was never found, but important items were looted.

The salvation of the rest was as unpredictable as its presence in that basement. The extraordinary efforts required (supported by Donald H. Rumsfeld, then defense secretary) may have salved the consciences of those in the United States administration who failed to stop the torching of the great Central Library in Baghdad a few weeks earlier.

As for the Jewish population’s decline, perhaps the collection will eventually shed light on the massacres, hangings, expulsions and degradations that befell its members beginning in the 1930s. But the exhibition’s text provides a broad portrait. Nazis and their Islamic allies began making inroads, culminating in the Farhud pogrom in 1941; the exhibition says 180 Jews were killed and hundreds more injured; other estimates are higher. Later that decade, Iraq’s entry in the war against Israel led to edicts removing Jews from public life and imposing restrictions on their commerce and travel. Mass migrations followed, requiring forfeiture of property.

Some sense of the delicate maneuvering required by the remaining Jews in Iraqi is clear here in a 1949 Hebrew primer. Two pages with a poem declaring loyalty to King Faisal II were ripped out after he was killed in a military coup in July 1958. It is as if mixed feelings of loyalty and vulnerability first required including the pledge and then required destroying it.

Difficulties mounted again with the 1963 rise of the Baath Party. And Islamist attacks in recent years have not inspired confidence about returning this collection. What evidence is there that Iraq will now treasure artifacts of Jews and other cultures? How would this archive be freely studied? Since these documents were forcefully taken from the Jews of Iraq, was the 2003 State Department agreement even valid? But if they belonged to that population, who are its rightful heirs? Iraqi Jews now living in other countries?

The one thing that is clear is that this textual trace of a community’s life is not a backwater chronicle. The exhibition reminds us that while the West’s influence on Judaism has been profound, it is by the waters of Babylon that many texts and practices of exilic Judaism were codified, beginning a long evolutionary journey — even if this strand came to a grievous end in the muck of Iraq’s Mukhabarat.

Could there be a starker contrast between the fate of the Iraqi Jews, whose roots in Mesopotamia were laid more than 2,000 years ago, denied even the return of books and documents, and barely a word about this in most of the media, and the claims made on behalf of the self-identified Palestinians and three generations after, insisting on a right to "return", even with as little as two years' tenency in what became the State of Israel in '48.

You are right, but the mainstream media have woken up to this in a way they have never covered the Jewish Nakba before - NY Times, NPR, BBC, etc. Not so bad.

That's because we Jews from Arab countries do not go around whimpering and asking for "lella" (the way beggars do). Also we do not look like beggars. we have taken ourselves in hand and found jobs , raised a family who in turn have important jobs and are a credit to their family!!!
sultana

Yes, Sultana. Precisely, and yet that is why Jews, from wherever, are so resented.

The US will return the Jewish archives to Irak, just to show the Jews who is the boss. He does not care!!!!!.