Iraqi archive: Up close and personal

The exhibition of the Iraqi Jewish Archive at the National Archives building is not just a historical record of a now-extinct Jewish community, but is deeply personal for Iraqi Jews and their descendants.

According to the president of the World Organisation of Jews from Iraq (WOJI), Maurice Shohet, community members have travelled from London, Ohio, Boston, Memphis and other cities to see the IJA exhibition in Washington, DC.

The National Archives informed WOJI that among the visitors was Professor Sami Gourgy Shina, from Boston. He was interviewed for a Washington Post article when the story of his late sister Farah Shina al-Kebir was featured last August (Archives readies a schoolgirl’s records and a trove of Jewish treasures for return to Iraq). Farah Shina al-Kebir's outstanding school records were featured in a Washington Post article. Farah (above) died in the 1960s in Oxford.

On 15 November, Sabah Daniel, the son of Salman Daniel, head of the management committee of the Jewish Community in Baghdad in the 1950s, came to visit the exhibit from Pennsylvania.

Amira (nee Shohet) and her husband Jack Bernstein came from Ohio. Amira is the daughter of Yaacob Moshe Shohet. He was a Hebrew teacher at the Frank Iny School and published prayer books and the yearly Ibur (Hebrew calendar) of the community. Amira discovered the Minha and Arbith (Maariv) prayer book in the exhibit. Titled Siddur Yaacub Shohet, it  was authored by her late father (below). 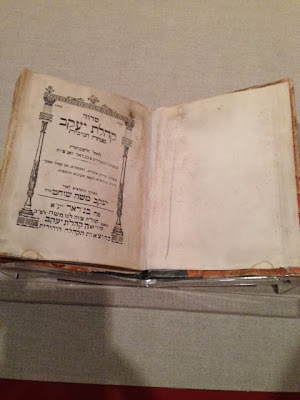 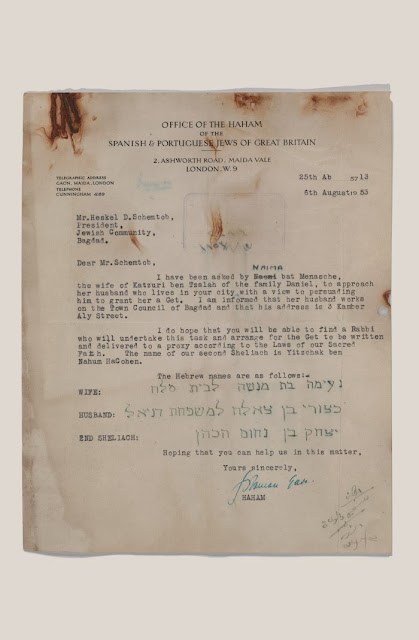 In several cases the actual document owners are alive: for instance Edwin Shaul Shuker, an activist on behalf of Jews from Arab countries based in London, was astonished to be told that his school records were on display.

Ben Cohen, a former BBC producer and  writer based in New York who publishes frequently on Jewish and international affairs, recognised a letter(pictured above) addressed by his grandfather, Haham Solomon Gaon of the London Spanish and Portuguese Jews' Congregation, to the president of the Iraqi-Jewish community in 1953. The letter enquired after the estranged Baghdad-based husband of a woman in London who was denying her a Get (bill of religious divorce).

Carole Basri, a spokeswoman for Iraqi Jews and US lawyer who spent time in the country following the US invasion in 2003, also has a personal stake in the Archive. She is the grand-daughter of Frank Iny, who founded the last Jewish school in Baghdad. There is a large collection of documents from the Frank Iny school in the Archive. The school closed its doors in 1974.

Well done, I still remember the liberation of Israelis in Idi Amin's airport!
Made my heart beat wildly
sultana