That's my house in Egypt you're living in

Tahrir Square has been in the news as the focal point for Egypt's 'Arab Spring' revolutions. But how many people know that the imposing buildings around it were once home to Cairo's wealthy Jews ? In an extraordinary five-page feature published on 12 July in the Weekend Supplement of the Hebrew newspaper Yediot Ahronot titled "That was my house "(no link available), Ronen Bergman explores the highly sensitive question of property and assets seized without compensation from Jews in Egypt. The list is not exhaustive (with thanks: Levana): 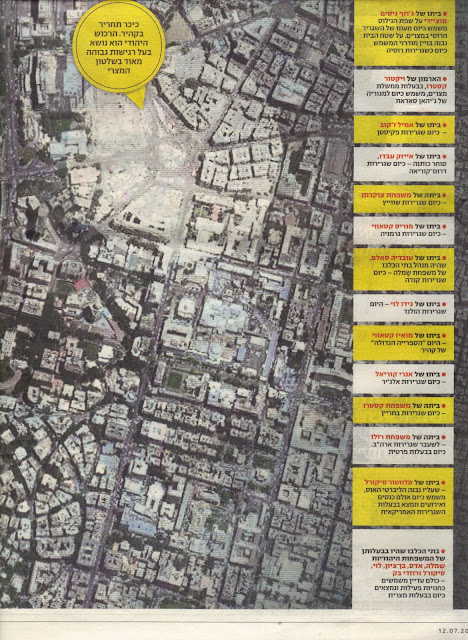 That's my house you're living in... or mansion, or palace. Partial list of Jewish properties around Tahrir Square


Joseph Nissim's home on the banks of the Nile: Now the residence of the Russian ambassador. The site houses the modern Russian embassy.

The home of the Zuckerman family. Now the Swiss embassy.

Ovadia Salem's house. The home of the manager of the Chemla department store is today the Canadian embassy.

The Castro family house. Today the embassy of Bahrain.

The Rollo family house. Formerly the US embassy. Now in private hands.

Salvatore Cicurel's house. Became a stock exchange and events hall. Now part of the US embassy.

My house is your house: Jewish rights denied

Shame! So sad to see the Jews leaving these treasures!

"The Rollo family house. Formerly the US embassy. Now in private hands."

If the US embassy occupied the Rollo family home for a number of years without paying rent to the Rollos, then they should demand unpaid back rent from the Americans. They were using property stolen from the rightful owners. The US is in arrears.

The most important point is the solution brought in this article by Uzi Arad - former Head of the Israeli "National Security Headquarter" - to pay COMPENSATIONS TO BOTH SIDES, out of the International Fund proposed by Bill Clinton at Camp David 2, on July 2000. This is one of the 8 resolutions of the N.S.H. "working paper", presented to Bibi Netanyahu by Uzi Arad on that matter.
We could only wonder why this International Fund is not yet established, when it seems as a real solution to the so-called Palestinian Problem, and a real tool for Peace.
Levana Zamir

I'm avidly WITH you, but alas, at the moment the Egyptians are beggars on short rations. We've waited 60 years. Let's keeep an eye on it. Good job!

Are there on-line references supporting the specific claims in the published map?

http://www.bh.org.il/he/database-article.aspx?48703
via google translate
Jewish community in Cairo, Egypt
. . . .
In the second quarter of the twentieth century wealthy families stayed around Midan Al - Tahrir and conducted a Western lifestyle. Exclusive suburb of Maadi and that in 1945 there were 555 families.
. . . .
In 1954 were Jewish underground cell in Cairo, and intensified hostility, and following the Sinai Campaign (1956) Jewish property was confiscated and closed community institutions. Many went to Israel. On the whole Egypt in 1960 were about 8,500 Jews.

In addition, here are some general references which mention that members of the Jewish community lived and owned residences in Tahrir.

1. My life in Abu Zaabal and Tora and other accounts at HSJE.org, the HISTORICAL SOCIETY OF JEWS FROM EGYPT.

2. Aricles by Jehan Sadat, et al, edited by Aleya Serour: http://www.aucpress.com/freeebooks/WritingEgypt.pdf/
This is the publisher's information on page 2 of Writing Egypt: History, Literature, and Culture: copyright 2012 ISBN 9781617971419 . The publisher is The American University in Cairo Press.

Thanks for these references, Malca. Unfortunately I know of nothing more specific to the area around Tahrir square, apart from the site egy.com.

I am Yvette Salem,a niece of Ovardia Salem. There are other relations scattered around Europe and Israel. We should have some sort of plaque on the wall of the house at least.

Hi Yvette, I am married to Ovadia's Brother Dario's Grandson. My late Father in law was Santo, Ovadias nephew. This line of our family live over in the UK x

Hi Yvette, I am married to Ovadia's Brother Dario's Grandson. My late Father in law was Santo, Ovadias nephew. This line of our family live over in the UK x

Hi Mandy, Its me Yvette, writing. I sent you an email. glad you found this site. I am currently in Florida with my grandson Dylan. I will be back in August. i will call you then. love Yvette