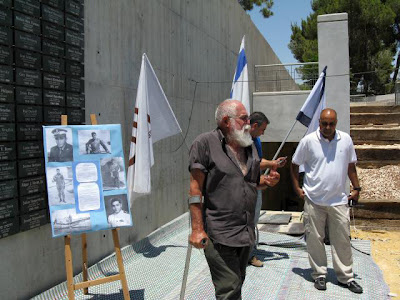 Yesterday, an Indian prisoner in a Pakistani jail died from the effects of a severe beating. Whatever the exact circumstances of his death, the case of Sarabjit Singh highlights the plight of dozens of Indians captured and jailed by Pakistan. Some of these are PoWs from the 1971 Indo-Pakistan war.

One such prisoner is a Jew, Flight Lieutenant Lloyd Sassoon, a Bene Israel officer pilot of the Indian Air Force born in 1942.

Nissim Moses, of the Indian Jewish Heritage Center in Israel, together with Sassoon's wife Sybia and family, now living in Israel, made several inquiries into the fate of Flt. Lt. Lloyd Sassoon, without any results.

On 21 July 2011 a memorial ceremony for Flt. Lt. Lloyd Sassoon Kandlekar was held at the Wall of Warriors on Ammunition Hill in Jerusalem. This wall honours Jewish soldiers who served in the armed forces of other nations.

However, no conclusive proof that Sassoon had died in action was ever produced. As a pilot, he would have been able to bail out, although his navigator would not have been equipped with a parachute. After his airplane was shot down,  Sassoon was apparently paraded as a captured PoW on TV by the Pakistanis, and recognised by Indian colleagues.

Says Nissim Moses: "Yet at the end of the war the Pakistanis declared him missing in action, fate unknown. Other sources say he was killed in action and apparently there are two graves of the persons killed on that mission, but nothing official and concrete".


Jas Uppal, a human rights campaigner for Indian prisoners in Pakistani jails, says: "The problem with the Indian PoW issue is that despite evidence that these PoWs were captured by Pakistani security forces, the Pakistani authorities continue to deny their existence. "

Email ThisBlogThis!Share to TwitterShare to FacebookShare to Pinterest
Labels: Jews of India, Jews of Pakistan