Shasha: where are the Middle Eastern Jews? 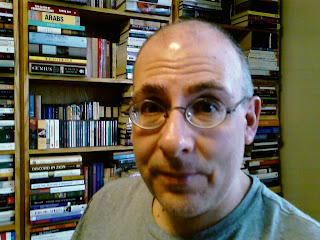 David Shasha (pictured) is having a bad week.

Two articles on the trot have upset this director of the Sephardic Heritage Center in New York: the first by Columbia University professor Joseph Massad on Al-Jazeera managed to offend so many that it was briefly pulled; the second on Open Zion, 'Throw away that rusty Key',  a response to an article on the Palestinian Nakba, was featured on Point of No Return.

About the first article, a bizarre and twisted rant conflating antisemites, Nazis and Zionists - the less said the better. What bothers Shasha most, writing in Mondoweiss about Massad's piece, is that Sephardim are absent from pro-Palestinian discourse. Massad insists on identifying Jews as Ashkenazim in his desperation to equate Jews with white settler colonialists:

It is therefore ironic that Massad, in seeking to counter Zionism, affirms its basic dogma that Jews are Europeans and not Middle Easterners. The contentious, ugly, and hateful battle between pro-Israel and anti-Israel forces is thus underscored by a rejection of Arab Jewish history and identity.

There are only two voices permitted in this discussion, Shasha laments: the Ashkenazi voice and the Arab voice. Thus far, we couldn't agree more.

Then his argument begins to unravel:

Sephardim have no allies in this battle and those Sephardim who remain convinced that they are a part of this discussion are seriously mistaken.

A perfect example of this, Shasha continues,  is The Open Zion article by Lyn Julius, co-founder of Harif.


What we see in all of Lyn Julius’ articles is a deeply devoted commitment to Zionism. Her advocacy marks Arab Jews as victims and supports the idea that the Jews of Middle East are indeed just like the Palestinians; homeless refugees who were oppressed by their host countries. What the article misses is the larger history of Jewish life in the Arab-Muslim world and some articulation of the glorious culture that it produced. All that we see is the hatred of the Arabs in a way that parrots the standard Israeli-Zionist approach.

Here Shasha is on much shakier ground: the glorious culture of Jewish life in the Arab Muslim world appears something of a red herring when Jews were forced to run for their lives from Arab countries. It's like saying that no discussion of the Jews escaping Nazi Germany is possible without a mention of the glorious contribution to German culture of Heine, Mendelssohn and Marx.

This is not to say that Jews from Arab countries were all Zionists - many were not. But one thing is sure: the establishment of Israel made the difference between life and death, offering the great mass of  Jewish refugees an unconditional  safe haven -  be they rich or poor, old or young, sick or healthy, uneducated or skilled.

It would be nice to know what Shasha means by 'the standard Israeli-Zionist approach', when  Israeli politics contains every shade of opinion and sentiment. However, it's no accident that Jews from Arab countries are amongst the political hawks, deeply mistrustful of their erstwhile Arab masters and still smarting from their recent experience of persecution and violence.

Shasha's argument then proceeds to leave the rails altogether, as he charges that the organisations Justice for Jews from Arab Countries (JJAC),  JIMENA and Harif are there to 'do the Israeli  government's bidding.'


"These are organizations that work hand in glove with the Zionist organizations in a way that seeks to aid Israel in its attempt to negate the claims of the Palestinian Arabs. In the course of this advocacy the matter of anti-Sephardi racism on the part of Ashkenazi Israel is completely ignored.

So these 'Sephardi' organisations are actually working against the better interests of Sephardim as a whole. Using Shasha's twisted logic, Sephardim should not be asking for recognition or compensation, because that benefits the Ashkenazi-dominated establishment in Israel. (No mention of the rights of Jewish refugees outside Israel, either.)

As for Shasha's smear that the three resource-starved organisations named above, who have struggled for years for public  attention, are 'fronts' for the Israeli government,  Stan Urman of JJAC told Point of No Return:

"JJAC generally, and me personally, have been vitriolically attacked by David. We must be doing something right!"

For Gina Waldman of JIMENA,  'there would be no greater honor".

Lyn Julius of Harif found the idea hilarious: "I never laughed so hard in my life," she said.

The new racism is one than removes Jews of the Eastern European diaspora from the course of Jewish history and recasts them as the "whitest" of all the colonialists and alien to Israel.
My ancestry is as authentic and Jewish as Jews of the Muslim world.
Even DNA now proves this to be so.
I admire the Mizrahi/Sephardi Jews I've met for their strong Jewish identity. And I understand their resentment that the early socialist founders of Israel weren't particularly appreciative of Mizrahi culture. But this is 2013 and apparently the great majority of Sephardim don't buy the drivel that their 'natural" allegiance is with Arabs against Ashkenazi "oppressors."

The ideology espoused by this Shasha character and others of his ilk is deeply reactionary and racist. As is Arab racist Palestinianism and Muslim supremicism. The irony is lost on them.

And Lyn Julius please keep writing, You are terrific.

I would just like to say:
Hitler did not bother to find out what kind of Jews he put in the gaz chambers!!!
sultana

Shasha's grandiose title for his organisation belies the fact that it is a one man dog and pony show operating out of the studio co-op that his parents bought for him. Aside from disability cheques his sole source of income is his "Center"[sic]. Anyone obssesed with the Ashkenazi-Sephardi interdynamic in this day and age is beyond deluded and sadly Shasha lives up to that expectation.

A Jew is a Jew is a Jew and engaging in divisive nonsense is a total waste of time. The difference between us and Ashkenazim really only relates to a disparity in secular education levels. We never had the Haskalah. By and large we were denied the educational opportunities afforded to our Ashkenazi brothers and sisters. When there was a huge influx of Sephardim-Mizrachim into Israel after Independence the nascent state struggled to absorb a largely destitute and uneducated mass of Olim. By 1975 those disparities began rapidly disappearing. That and the shared onus of military service rapidly shrank the divide so that today only ignoramuses and nutters obsses over "Ashkenazi racism."

Truth be told? It was us who more often looked down upon Ashkenazim, doubting THEIR Jewishness, refusing to allow "intermarriage" with them, and basically accusing them of being European imposters or at best sellouts. Israel today, with its strong Mizrachi character, a population that is mostly Sephardi-Mizrachi and with an establishment more in line with our values, conservative societal mores and spirituality, is anything but the oppressive and bigoted society that people like Shasha claim it to be.

The Sephardim were oppressed, just as Jews of color are oppressed by the definitely white and unrelated to early Jewish groups, Ashkenazi of N and NE Europe. Israel is a fascist apartheid state practicing most of the policies of Nazis of WWII Germany. Someone has to tell the truth. Rationalize all you want, the Akasha does not forget.

How do you know all this ?