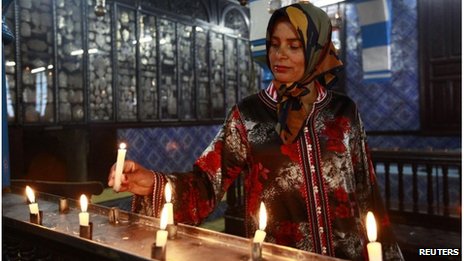 The annual Lag Ba'Omer pilgrimage to Djerba has provided the international media with more opportunity to distort the recent history of Jews in Tunisia, whose numbers are down from 100, 000 in 1948 to  1, 500 today.

The BBC Arabic service's Ahmed Maher is the latest to downplay the  antisemitism whuch led to the mass Jewish exodus. The tactic is to quote the words of 'dhimmi' Jews, such as one Mr Izra, who for whatever reason feel they must defend Tunisia's record. But what is most disturbing is that the reporter acts as a mouthpiece for the Tunisian government, denying inconvenient but documented evidence that the Jewish community feels increasingly threatened by the rise of Islamists in Tunisia.

The reporter interviews a succession of 'dhimmi' Jews. 'Dhimmi' Jews have a long tradition of saying what their Arab Muslim masters want to hear.

"They (Tunisian Jews) have never complained of discrimination, oppression or racism, as reported in the media" (..) . added Mr Izra.

"All Jews in Djerba and those who left it are not rootless. Tunisia gives us all a sense of identity."

Maher quotes Perez Trabelsi, without disclosing that Mr Trabelsi has a large stake in projecting a a positive image of Tunisia in order to best serve his extensive business interests in Djerba tourism. Indeed, his son Rene was a candidate to be minister of Tourism in the current government.


The head of the Jewish community in Tunisia, Perez Trebelsi, however, questions the narrative of some Western historians that Jews were also persecuted under Tunisian President Habib Bourguiba, the founder of the republic after independence from France in 1956.
"Bourguiba put all Tunisians on an equal footing, excluded nationalists, and annulled Sharia-compliant articles in the constitution like the ones related to polygamy and inheritance," Mr Trebelsi says.

He insists that "socialist policies, especially in the key agricultural sector, forced many Jewish businessmen to emigrate to Europe for better economic landscapes".

Mr Trabelsi's view is at odds with that expressed by Tunisian-born Jean-Pierre Allali, author of the book 'Les refugies echanges' :

Allali believes that Bourguiba pursued a strategy of deception, stringing the Jews along as long as Tunisia needed their skills, yet all the while intending to get rid of them. (...)

In the BBC article, Trabelsi is  at pains to play down the state's role in inciting anti-Jewish attacks following the Six-Day War. "Some [Tunisian] Jews came under attack but from mobs. It was individual practices really, not systematic".

Whether the government sanctioned the rioting or not was immaterial for 1967 refugee Sylvain Hayoun. He witnessed the burning of the great synagogue in Tunis. His mother ran to escape the mob. "To my disappointment, I saw some neighbors pointing out to the mob Jewish stores and cars to be burned," he recalls. "When you are a target for repression, even when not openly state-sponsored, you don’t see any peaceful future for you and your kids, you don’t have much choice than to try to leave the country."

Certainly, the state did nothing to encourage him to stay:

"When my parents made this choice in October, 1967, we couldn’t take more than one suitcase and 50 Dinars (probably equivalent to $100). Necklaces or anything in gold was confiscated at the port of departure. We closed our apartment door leaving everything in it."

The BBC article by Ahmed Maher  quotes Khodir Hanyna, a native Djerba businessman, who wants to dispel the sensationalist articles on Tunisian Jewry."The way Tunisian Jews are portrayed in the media is greatly exaggerated," he insists.

Then the BBC reporter Maher pens this gobsmacking passage:

"Several media reports spoke about YouTube videos that showed radical Islamists threatening Tunisian Jews. Despite searching extensively, I did not find any of them."

How bizarre. Thirty seconds on Google is all it took to unearth this :

The video shows supporters of Gaza Hamas leader Ismail Haniyeh, an official guest of the Tunisian government on a three-day visit in January 2012, greeting him at Tunis airport with cries of 'Death to the Jews! It is our duty." At the time, the event sent shivers down local Jewish spines.

The reporter Maher feels it  OK to mention that some Tunisian Islamists vowed support to the late al-Qaeda leader, Osama Bin Laden (the bombing of the Djerba synagogue in 2002, which claimed the lives of 21 tourists, was blamed on Al Qaeda) but he sweeps under the carpet the  anti-Jewish sentiment propagated by the Islamists of the Ennahda-led government.

Clearly, the Haniyeh visit is an episode that the Tunisian government, eager to attract the tourist dinars of visiting Jewish pilgrims to Djerba, would rather erase from memory - with the connivance of the BBC.

I came across an interesting article concerning the Jews of Tunisia:

I don't see much evidence of this supposed utopia of Muslim-Jewish co-existence. All I see is acceptance of dhimmi status rather than an assertiveness to be recognised as equals.

I've seen plenty of other articles where interviewed Tunisian Jews claim they are treated well in one breathe, and then admit that Tunisian Muslims see no difference between Tunisian Jews and Israelis.

You make a very good point.Journalists with less experience than Totten take declarations by dhimmi Jews at face value. The reader ends up confused. If a Jew does not admit to discrimination, why should anyone admit there is a problem, let alone fight for their rights?

Ah,thank you for the link

You know, the question I always ask myself as a Syrian Jew is why are we alone in our fight for justice?

Why is the Palestinian cause defended by Europe and an ever-increasing number of Jews, yet I only see Jews active in the Sefardi/Mizrahi struggle.

Bataween, have you encountered many in the Arab Muslim world that express any remorse or compassion for the Jewish refugees?

Honestly I have not. Most refuse to admit that any mistreatment occurred, and the few that do acknowledge mistreatment blame it on Zionism.

Very rarely have I encountered any Arab Muslims who express remorse. They do express nostalgia for the way things were, and a desire to turn the clock back, but never say 'sorry'.

However, they are terrified (eg the Egyptians) that the Jews will come back to reclaim their property, so they do have an underlying feeling of guilt.

The fight for justice for Sephardi/Mizrahi Jews got off the ground only about ten years ago, and is handicapped by patchy and mealy-mouthed support from the Israeli government. We do not have the vast resources of the Arab and Palestinian lobby, in fact we have no resources at all apart from the efforts of a few volunteers.

When I read the minimizing any Diaspora Jewish community may make about relations with their neighbours, I wonder how much to put down to fear of repercussions if they spoke more frankly which are, these days admittedly more threatening in Muslim-ruled countries than anywhere else in the Diaspora.

Undoubtedly this is their motivation. The 'dhimmis' in the article either live in Tunisa permanently, or have business interests they do not want to put at risk.

You know who puts us at most risk?

People who are so desperate to be loved in the Arab world that they are willing to lie about history.

In the late 1940s, when the struggle was going on over the creation --or reestablishment-- of Israel, a certain formed in the United States mostly or wholly among Reformed Jews to oppose Israel's recreation. The leaders of this "American Council for Judaism" were Reformed rabbis, although some of the Reformed rabbis did support Zionism in some way. These rabbis leading the ACJ had done little if anything positive to get the US Govt to intervene to mitigate the Holocaust or take in refugees.

Nevertheless, they feverishly opposed the Jewish state. At least one of them went to Iraq in that period and interviewed the chief rabbi at that time, Rabbi [as I recall] Sassoon Khedduri [spelling?]. The chief rabbi told Elmer Berger, the American Reformed rabbi and leader of the AJC that Jews were well treated in Iraq [this was after the Farhud] and had always been well-treated in Iraq and a Jewish state was not necessary, etc etc. Here is an excerpt from one of Berger's books, kindly reprinted by the PLO's Institute for Palestine Studies:

"By the end of Israel's 'War of Independence', there were still 130,000 Jews in Iraq. As the Chief Rabbi of Iraq, Sassoon Khedduri, explained a few years later:

‘The Jews - and the Muslims - in Iraq just took it for granted that Judaism is a religion and Iraqi Jews are Iraqis. The Palestine problem was remote and there was no question about the Jews of Iraq following the Arab position.’ [Rabbi Elmer Berger, Who Knows Must Say So, Institute for Palestinian Studies, Beirut, p.30]"

Of course, Berger and Greenstein and their ilk do not mention the Farhud or the Nazi & Holocaust collaboration of Haj Amin el-Husseini. [the source of the quote from Berger in my comment above is Tony Greenstein's blog]