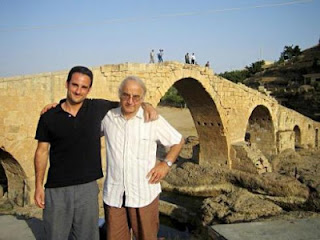 
When some 25,000 Kurdish Jews were driven out of Iraq and Iran, a unique story and culture came to an end. Poet and author Moris Farhi reviews one of the few Kurdish-Jewish memoirs in English, 'My father's paradise' by Ariel Sabar (now in paperback) for the Jewish Chronicle:

In this memoir by Ariel Sabar, the “paradise” of the author’s father, Yona, is Zakho, a town on an island of the Habur river, close to the Turkish border in Kurdish Iraq.

In the 1930s, when Yona’s story begins, Zakho had a population of 27,000. Inhabited predominantly by Muslim Kurds, it boasted a Jewish minority assumed to be the progenies of Nebuchadnezzar’s captives banished to Babylon.

Remarkably, these Jews, mostly illiterate, spoke neither Kurdish nor Arabic, but Aramaic, a language, some three millennia old, which served the Middle East as lingua franca for much of that time-span and which still has two prayers, the Kaddish and the Kol Nidrei, in the Hebrew liturgy.

Life was never easy for Kurdish Jews. But it had its paradisal aspects. Ensconced for centuries in a harsh region where good luck and/or misfortune struck people indiscriminately, Muslims, Jews and Christians, while maintaining their faith and social standings, had developed an enviable coexistence.
Equally importantly, the Jews treasured a compelling spiritual world, an oral tradition of countless narratives distilled both from the Old Testament and a cornucopia of cultures.

This “paradise” was lost when Arab nationalism erupted. Upon the establishment of the state of Israel, Iraq expelled all the Jews from the country.

The fledgling State of Israel opened its gates to these exiles. While his family had difficulties settling down, Yona Sabar found salvation in education.

As a “literate” Kurdish Jew who spoke Aramaic, he soon drew the attention of academia. He became a dedicated scholar of Aramaic, first in Israel, then in the United States. Given the better resources for research in the US, he settled there. Producing seminal works over the years, he became one of the greatest authorities in that ancient but dying language.

The latter part of My Father’s Paradise narrates the growing interest of Yona’s son — the author, Ariel — in his father’s roots. Eventually, father and son travel to Zakho. Despite the warm welcome they receive from the Kurds, some of whom still remember the family, Yona realises that the present can accommodate the past only as a nostalgic “paradise”. Later, after another emotive trip to Zakho, Ariel attains a better understanding of the effects of lost paradises.

An eye-opener on the diaspora’s cultural breadth which we often under-estimate, My Father’s Paradise is an outstanding memoir.