What will happen to Alexandria's Jewish heritage? 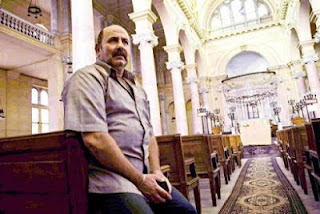 What will happen to Alexandria's priceless Jewish heritage now that the community is almost extinct? An international committee should take it over, but when is the right time to start talking to the new regime - and will they even answer? Anna Sheinman investigates for the Jewish Chronicle:

Ben Youssef Gaon is the last Jewish man in Alexandria. As the president of the Jewish community in the city, he controls huge swathes of property, including synagogues, cemeteries and commercial and residential properties, all administered by a large team of Egyptians. A campaign is under way to stop the property, much of it donated by Jews fleeing after the 1956 Suez Canal crisis, going to the Egyptian state when he retires.

In 1937, Egypt's second city had a Jewish community of 25,000. Now it has only one functioning place of worship. The imposing Eliahou Hanavi Synagogue on Nebi Daniel Street had only two men at the erev Rosh Hashanah service this year, Mr Gaon and an American embassy employee. In previous years, a minyan from Israel made the trip for the High Holy Days, but diplomatic relations have deteriorated following Egypt's revolution, and some sources say the group were refused visas.
Stored in the synagogue are many precious sifrei Torah. The community also holds genealogical records and other valuable religious and cultural material, all of which may soon go to the Egyptian state.

A former cantor at Eliahou Hanavi, 81-year-old Geoffrey Hanson, whose visa to visit Egypt has been refused for the past five years for reasons unknown to him, is on a mission to protect the property, which he estimates as worth 100 million euros.

Mr Hanson, who now lives in Israel, suggests a solution: "A group of [ex-pat] Alexandrian Jews must come together and say they will run the community after Mr Gaon."

Roger Bilboul, president of the Paris-based Nebi Daniel Association, which acts to preserve Jewish cultural and genealogical heritage in Egypt, is broadly in agreement. "The idea of creating an international committee which can take over is something we have put to the government, but we have never had a response."

Bureaucratic stumbling blocks have increased following the revolution, but Mr Bilboul is optimistic. "We need to start knocking on doors, establishing a relationship with the new people in power. We are hoping to start by the end of this year."

But the situation in Alexandria currently is "very, very dangerous," says Desiré Sakkal, director of the Historical Society of Jews from Egypt, which is based in New York. This week, there was a fire on Nebi Daniel Street, in which book kiosks were burned, showing the level of anti-cultural feeling in the city. Although he supports the plan in principle, to act now would be "pure madness," Mr Sakkal said.

Mr Gaon has himself come in for criticism. His rival for the presidency, Victor Balassiano, wrote an article for the Historical Society accusing Mr Gaon of seizing power and changing the locks on the synagogue while Mr Balassiano was on holiday.

He is also alleged to have converted to Islam, something required on marriage to a Muslim woman in Egypt. However, Roger Bilboul asserts that Mr Gaon is now divorced, and has documentation affirming his Jewish faith.

Additionally, Mr Sakkal said: "Mr Gaon is [allegedly] an appointee of the Egyptian state, so you have to be very suspicious". Ben Youssef Gaon himself was not available for comment.

Save Egypt's heritage and assets now!
Posted by bataween at Thursday, September 27, 2012