The Mufti and Hitler's shared aim: kill the Jews 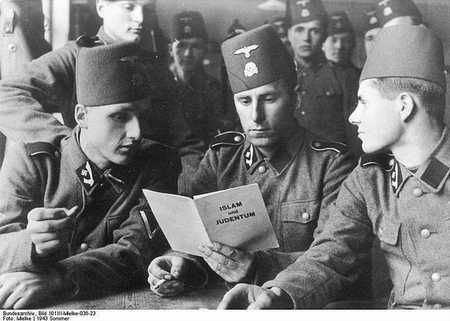 Bosnian Muslim soldiers of the SS Khanjar Division, raised by Haj Amin al-Husseini, read a pamphlet entitled "Islam and Judaism" in 1943
Palestinians and their advocates are making strenuous efforts to distance their cause from the Mufti of Jerusalem's alliance with Hitler. Fresnozionism blog restates the connection between the Mufti and murderous anti-Jewish riots in in Hebron, the Farhud in Baghdad, anti-Jewish incitement in Egypt and the expulsion of the Jews from Arab countries. Be sure to watch the rare video of Haj Amin al-Husseini's Berlin meeting with Hitler in November 1941, his villa and office:
Al-Husseini — whom Yasser Arafat (probably falsely) claimed as an uncle — had tremendous influence among Palestinian Arabs from 1920 until he fled to Iraq in 1937 (1939 -ed). The vicious pogrom in Iraq in June 1941, called the Farhud, was partly due to his incitement.


The inspiration behind the coup, and the Farhud itself, came not from Baghdad, but Jerusalem. The Grand Mufti, Haj Amin al-Husseini, sought refuge in Iraq in 1939 with 400 Palestinian émigrés. Together, they whipped up local anti-Jewish feeling. An illiterate populace imbibed bigotry through Nazi radio propaganda. Days before the Farhud broke out, the Nazi youth movement, the Futuwa, went around daubing Jewish homes with a red palm print. Yunis al-Sabawi, who, together with the Mufti and Rashid Ali, spent the rest of the war in Berlin, instructed the Jews to stay in their homes so that they could more easily be rounded up. — Lyn Julius, “Farhud: a slaughter in Iraq“

In November 1941 he met Hitler in Berlin, where he helped create a Waffen SS division of Bosnian Muslims to fight for the Reich in Eastern Europe. Here is an incredible video, including WWII German footage and narrated by historians Robert Wistrich and Sir Martin Gilbert, that describes al-Husseini’s service to the Nazis, and shows how the Mufti cross-pollinated Islamic and Nazi antisemitism (7m 55s):
If you can see this, then you might need a Flash Player upgrade or you need to install Flash Player if it's missing. Get from Adobe.

One of Husseini’s tasks for Hitler involved Arabic propaganda broadcasts to the Middle East:
"The Nazi Arabic-language broadcasts were the result of a collaboration between officials in the German foreign ministry and pro-Nazi Arab exiles who found refuge from the British in Berlin, most notably Haj Amin al-Husseini, the Grand Mufti of Jerusalem and the most important Palestinian religious and political figure of the era, and Rashid Ali al-Kilani, leader of a pro-Axis coup in Iraq in 1941, which was quickly reversed by the British military [but not before the Farhud -- ed.]. Husseini’s and Kilani’s arrival in Berlin in 1941 provided the Axis with a rare asset: Arabs who could communicate Nazi ideas in colloquial, fluent, and passionate Arabic…"

Following the arrival of Husseini and Kilani in Berlin, the broadcasts more skillfully integrated the Nazi perspective on World War II with themes of Arab nationalism, as well as rhetoric that we would now call fundamentalist or radical Islamic. On July 3, 1942, as Rommel’s Afrika Korps advanced toward El ‘Alamein, about 60 miles west of Alexandria, Egypt, a station called Berlin in Arabic announced that German and Italian forces were coming to “guarantee Egypt’s independence and sovereignty,” and “to liberate the whole of the Near East from the British yoke.” Husseini, who came on the air to celebrate Rommel’s “glorious victory,” declared that “the Axis powers are fighting against the common enemy, namely the British and the Jews.” …
At 8:15 p.m. on July 7, 1942, the Voice of Free Arabism played a remarkable program titled, “Kill the Jews Before They Kill You.” The broadcast began with a lie: “A large number of Jews residing in Egypt and a number of Poles, Greeks, Armenians, and Free French have been issued with revolvers and ammunition” to fight “against the Egyptians at the last moment, when Britain is forced to evacuate Egypt.” The broadcast continued:


“In the face of this barbaric procedure by the British we think it best, if the life of the Egyptian nation is to be saved, that the Egyptians rise as one man to kill the Jews before they have a chance of betraying the Egyptian people. It is the duty of the Egyptians to annihilate the Jews and to destroy their property. " You must kill the Jews, before they open fire on you. Kill the Jews, who have appropriated your wealth and who are plotting against your security. Arabs of Syria, Iraq, and Palestine, what are you waiting for? The Jews are planning to violate your women, to kill your children and to destroy you. According to the Muslim religion, the defense of your life is a duty which can only be fulfilled by annihilating the Jews. This is your best opportunity to get rid of this dirty race, which has usurped your rights and brought misfortune and destruction on your countries. Kill the Jews, burn their property, destroy their stores, annihilate these base supporters of British imperialism. Your sole hope of salvation lies in annihilating the Jews before they annihilate you.”

After the war, al-Husseini continued his work toward the extermination of the Jewish people. The British actually allowed him to return to Mandate Palestine, where he became head of the Muslim Brotherhood in Jerusalem. Later he went to Cairo, where he was a key player in the ODESSA network that helped former SS war criminals escape, and in many cases find refuge in Arab countries. It’s said that his influence was partly responsible for the expulsions of Jews from Arab countries after 1948.
Read post in full
Posted by bataween at Monday, February 20, 2012

You are trying to scare us, right?
suzy vidal

Careful. You're giving another hero to the Berkeley leftists.