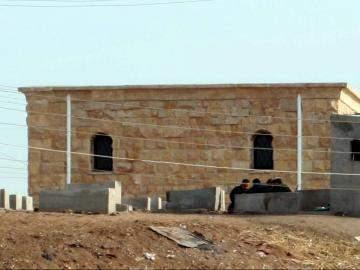 The tomb of Rabbi Abu Hatseira in the Nile Delta (Photo: A. Hayman)

Reports that this year's annual pilgrimage to the tomb of Rabbi Abu Hatseira in the Nile delta near Alexandria had been cancelled seem to have been exaggerated. But pilgrims will have to run the gauntlet of several groups of protestors. Elder of Ziyon has the story:

A number of political groups in Egypt announced Monday that they plan to protest at the Abu Hasira festival near the delta city of Damanhour.

The festival, scheduled for 9 to 10 January, is held on the annual anniversary of the death of Abu Hasira, whose mausoleum is located in the village of Damtu outside Damanhour.

The groups said they will form human shields to prevent any "Zionist" visitors from visiting Abu Hasira's tomb in the near future, saying that such a visit was unpopular, and unacceptable legally and politically, state-run news agency MENA said.

Bloggers Against Abu Hasira, the Nasserist Trend, the Muslim Brotherhood, the Freedom and Justice Party, the April 6 Youth Movement and the Mohamed ElBaradei campaign signed the group statement.

Permission for Israelis to visit Abu Hasira’s tomb has angered some in Egypt, especially because it is not included in the list of celebrations authorized to be held in Egypt. The Supreme Administrative Court upheld a 2001 lower court decision to abolish the annual event.

In 2009, Israeli reports indicated that ousted President Hosni Mubarak agreed to a request on behalf of Israeli Prime Minister Benjamin Netanyahu to allow hundreds of Israelis to celebrate the festival.

He died in Damtu in 1880. Every year, thousands of Jews come to celebrate the anniversary of his death.

After Egypt and Israel signed the Camp David Accords in 1979, Israel requested the cooperation of the Egyptian security authorities in the organization of annual official trips to the tomb for the festival, which lasts for a period of one week.

The celebrations include a number of Jewish rituals along with the consumption of dried fruit, butter and feteer. During the celebrations, the visitors sit at the mausoleum, cry, recite Jewish prayers and slaughter animals in accordance to Jewish law.

The mausoleum, which includes the tomb and the hill it is situated upon, is among the Jewish Antiquities in Egypt registered with the Egyptian Ministry of State for Antiquities. Former Culture Minister Farouk Hosni issued decision No. 75 of 2001 annexing the mausoleum to the Supreme Council of Antiquities. The youth division of the Muslim Brotherhood party said that "cessation of these celebrations should be considered one of the fruits of the January 25 revolution."

But don't call them anti-semitic. They're just "anti-Zionist."

Read post in full
Posted by bataween at Tuesday, January 10, 2012

And pray tell me what does UNESCO care about Isreal???
sultana