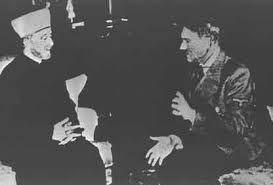 As the world marks Holocaust Memorial Day, Petra Marquart-Bigman in her Jerusalem Post blog can't help but recognise an eerie similarity in genocidal intent between the Palestinian Mufti and his 1940s predecessor, Haj Amin al-Husseini.
.
Sheik Muhammad Hussein, the mufti of Jerusalem, who is the Palestinian Authority's senior religious official, recently recited a traditional Islamic text urging Muslims to “fight and kill the Jews” during a ceremony celebrating the 47th anniversary of Fatah’s establishment, he unintentionally revealed how little the messages of Palestinian religious leaders have changed since the days of another Palestinian mufti by the name of Husseini.
This deplorable rhetorical continuity also serves as a timely reminder that words are usually spoken to inspire deeds. Palestinians, eagerly echoed by many of their world-wide supporters, like to claim that they had no part whatsoever in the Holocaust, and that they should indeed be seen as indirect victims of the Jews who fled Europe.
This “narrative,” which seems particularly popular among Germany’s progressive elites, requires that the historical record of Amin Al-Husseini – the predecessor of the current Palestinian mufti – is ignored. While both muftis call for killing the Jews, Husseini sought and seized the opportunity to contribute to the Nazi’s genocidal undertaking to kill as many Jews as possible.
In a review of a book by Klaus Gensicke about Husseini’s collaboration with the Nazis, John Rosenthal emphasized that the mufti did not only collaborate with the Nazis by contributing to propaganda activities aimed at Arab speakers and by organizing the Muslim SS division “Handzar” in Bosnia:
Indeed, perhaps the most shocking finding of Gensicke’s research concerns the repeated efforts of the mufti after 1943 to ensure that no European Jews should elude the camps [...] Thus, for example, Bulgarian plans to permit some 4,000 Jewish children and 500 adult companions to immigrate to Palestine provoked a letter from the mufti to the Bulgarian foreign minister, pleading for the operation to be stopped. In the letter, dated May 6, 1943, Husseini invoked a “Jewish danger for the whole world and especially for the countries where Jews live.” [...]

Inevitably, some people will be inclined to argue that Husseini was only defending the national interest of the Palestinian Arabs when he tried to prevent any Jewish emigration from Europe. But as Gensicke has shown, Husseini was convinced that there was a “Jewish danger for the whole world and especially for the countries where Jews live,” and in May 1943, he also expressed this view in a letter.
Soon after Husseini had written these words, Arab regimes proceeded to demonstrate that they shared this view. The Arab League drafted Nuremberg-style laws designed to disenfranchise and dispossess Jews, and Arab states began to encourage the ethnic cleansing of the ancient Jewish communities that had existed for millenia all over the Middle East. Hundreds of thousands of the Jews who had to flee from Arab countries found refuge in the fledgling Jewish state that the Arabs vowed, and tried, to wipe out.

Back then, the motives may have been rooted in Arab nationalism, but as the recent remarks by the Palestinian mufti illustrate, there is a long and – according to the mufti, “noble” – tradition of Jew-hatred in Islam that up to this day is regularly invoked to present the Arab and Palestinian refusal to accept the existence of Israel as a Jewish state as part of a fight against Jews that is an integral component of Muslim identity.

Nazi-like rhetoric about Jews is nowadays mostly expressed in Arabic and Farsi, and just like 70 years ago, there is widespread reluctance to confront this rhetoric and face the fact that it is meant as incitement to deadly deeds.
Read article in full

The Mufti and the US election, then and now (JTA News - with thanks Eliyahu)
Posted by bataween at Sunday, January 29, 2012

Does anyone know where can I find texts about the history of Jews in Palestine and in the ME in Arabic? I already know yahoodi1 and Israel in Arabic...

If you're located in Israel, you could try the library of the Ben Zvi Institute / Yad Ben Zvi in Jerusalem. Maybe also the Babylonian Jewish Heritage Center and places like that.

Here's another article comparing today's Mufti with the Mufti Husseini of 70 years ago, blamed --by the way-- by an Iraqi govt investigating commission for inciting the Farhud, together with his entourage.