The New York Times has this review of Lucette Lagnado's second book, The Arrogant Years. Like The Man in the White Sharkskin Suit, this one also recalls The Lagnado family's early life in Egypt. This time the main focus is on Lucette's mother: it's a novel about self-confidence and feminism. Via JIMENA.

The coming-of-age memoir is centered on a premise that anyone would grant: growing up is hard. The genre’s challenges lie in how to articulate memory and the passage of time, how to express what’s forgotten as well as what’s recalled, how to capture the shifting self — challenges to which we have a short history of solutions. Memoir writers are enticingly free to forge innovations. 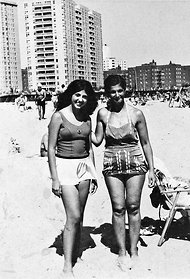 Lucette Lagnado, an award-­winning investigative reporter at The Wall Street Journal, doesn’t stand the form on its head in her enchanting new memoir, “The Arrogant Years.” But she does break new ground. The fact that this memoir exists is interesting. It is the second of two. The first was the brilliant “Man in the White Sharkskin Suit,” published in 2007. Both books cover roughly the same era, and both tell the moving story of how Lagnado’s Jewish parents, Edith and Leon, grew up, met and married in old-world Cairo at the end of the Farouk monarchy, when Jews and Muslims lived peaceably together. After the founding of Israel and the revolution of 1952, Jews were forced to leave Egypt in droves. The Lagnado family was among the last to leave. Both books describe their sad journey, first to Paris, then to Brooklyn, where Lagnado’s parents fought to find their footing and made myriad hopeless attempts to “rebuild the hearth.” They watched in horror as their children swiftly assimilated and moved on: “That was America for you — a land where children went away and parents were left behind.”

It’s risky to write a second memoir about the same time period, but in Lagnado’s hands, the result feels natural and right. She skillfully reminds us that a single human life is infinitely complex, that there are as many sides to a story as times it is told. In places you can see her struggling not to repeat herself, and mostly she succeeds. She does it by making the books different in scope and style. The first memoir reads like a character study, with the lens trained on Leon — his charm and popularity (he played cards with the king!), his exile from his homeland (“Take us back to Cairo,” he cries), his innumerable losses, his retreat into solitude and prayer, and his slow demise in a nursing home. The second memoir is about Edith and “Loulou” (as Lagnado was called), both of them battling their fates and growing up in times of social change, when feminism — first in Egypt, later in America — was new and loud and romantic. It’s about the beauty and arrogance of youthful self-­determination, and the forces that conspire to knock that determination to the ground.

The cautionary tale that haunts Loulou concerns Edith, a beautiful, lonely girl raised penniless and fatherless in 1930s Cairo. Through intelligence, patience and drive, she rises far above her station and becomes the head librarian at the prestigious École Cattaui after being taken under the wing of the pasha’s wife, who “became her patron saint and guardian angel and surrogate mother all at once.” From that pinnacle, at age 20, she makes the “terrible mistake” of marrying Leon, a much older man she barely knows. Within weeks she loses everything — her beloved job, her hard-won independence, her formidable mentor — and becomes an ill-­equipped housewife, goaded by her mother-in-law and ignored by her husband (though she does bear him child after child, the last of whom is Loulou).

In 1960s Brooklyn, a young, spirited Loulou will not have this fate. She sits with Edith each Saturday behind a tall decorative wooden divider that separates the women from the men at the Shield of Young David synagogue. Loulou doesn’t see why the women must hide. Inspired by her hero, Emma Peel of “The Avengers,” she wants to hack the divider to pieces and take her deserved seat in “the world beyond.” She leads a mini-rebellion of girls who try to sneak their seats into the men’s section, and soon the divider takes on multiple significances. She is lodged between many worlds: old and new, Arab and American, immigrant and native, Jewish and secular, traditional and modern, patriarchal and feminist, ascetic and flirtatious.

Edith’s and Loulou’s lives continue to run parallel. Loulou, at the height of her youthful accomplishment, having been admitted to Vassar at right about the same age that Edith became a head librarian in Egypt, is struck down, not by marriage, but by Hodgkin’s disease. She recovers, but her confidence is shaken (once at Vassar, she feels “invisible,” “inferior to every woman I saw”), and her “arrogant” years are over. “Suddenly, I felt fearful — so fearful that I stayed silent,” she writes. “I worried about sounding foolish, no longer sure of my ideas. The self-­confidence and drive that had propelled me since I was a child were gone.”

Review in The Tablet

Posted by bataween at Wednesday, September 21, 2011