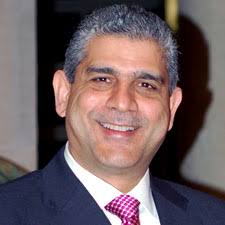 So now we know. If the Palestinians' bid next week to win UN approval for a new state of Palestine is successful, there will be no Jews living there, says the PLO's ambassador to the UN in this USA Today report. With no Jews in Jordan, none in Saudi Arabia, and only a handful living in the remaining Arab states, the ethnic cleansing of the Arab world of its Jews will be complete. (With thanks Rona; Frank)

"After the experience of the last 44 years of military occupation and all the conflict and friction, I think it would be in the best interest of the two people to be separated," Maen Areikat, the PLO ambassador, said during a meeting with reporters sponsored by The Christian Science Monitor. He was responding to a question about the rights of minorities in a Palestine of the future.

Such a state would be the first to officially prohibit Jews or any other faith since Nazi Germany, which sought a country that was judenrein, or cleansed of Jews, said Elliott Abrams, a former U.S. National Security Council official.

Israel has 1.3 million Muslims who are Israeli citizens. Jews have lived in "Judea and Samaria," the biblical name for the West Bank, for thousands of years. Areikat said the PLO seeks a secular state, but that Palestinians need separation to work on their own national identity.

The Palestinian demand is unacceptable and "a despicable form of anti-Semitism," Abrams said. A small Jewish presence in a future Palestine, up to 1% of the population, would not hurt the Palestinian identity, he said.

"No civilized country would act this way," Abrams said.

I would be very surprised to find Jews willingly wanting to live in Jewish hating countries.
"They do not want us anywhere
so I will never go back there"
extract from my poem "Maalesh ya Zahra"
sultana latifa

A Jew living under PLO/PA control would be under a constant threat of death, despoliation, or expulsion.

You're right, Eliyahu, that's why by definition there cannot be peace.

With not much effort, you can find languages in which the absence of jews conforms to the definition of "peace."

The same Arab-Nazi Judenrein plan... as you hear PLO's admission of a "vision" of a Jew-Free[1] (23rd) Arab State in Palestine...

In November, 1941, the Grand Mufti meets with Adolph Hitler[2]. Hitler declined to shake the Mufti's hand and refused to drink coffee with him[3]. (As Arabs were considered "monkeys" by Hitler/Nazis[4]). But still managed to cooperate against the Jews[5]. The Islamic pan-Arab leader also called for a jihad against the British and their Western allies[6].

Nationalist rhetoric accompanied major efforts to build fascist-style youth organizations by recruiting young men to serve as the strike force of the nationalist movement. Throughout the 1930s the children of wealthy Palestinians returned home from European universities having witnessed the emergence of fascist paramilitary forces. Palestinian students educated in Germany returned to Palestine determined to found the Arab Nazi Party.

The Husseinis used the Palestinian Arab Party to establish the al-Futuwwa youth corps, which was named after an association of Arab Nazi Scouts. By 1936 the Palestinian Arab Party was sponsoring the developments of storm troops patterned on the German model. These storm troops, all children and youth, were to be outfitted in black trousers and red shirts... The young recruits took the following oath: "Life -- my right; independence -- my aspiration; Arabism -- my country, and there is no room in it for any but Arabs. In this I believe and Allah is my witness." .. The al-Futuwwa youth groups connected Palestinian youth to fascist youth movements elsewhere in the Middle East. While the Mufti was establishing youth groups in Palestine, al-Futuwwa groups were established in Iraq.[7]

Nazi Palestine: The Plans for the Extermination of the Jews in Palestine By Klaus-Michael Mallmann, Martin Cüppers
http://books.google.com/books?id=8JiqNpE-Lz4C
http://i43.tower.com/images/mm113448006/nazi-palestine-plans-for-extermination-jews-in-klaus-michael-mallmann-paperback-cover-art.jpg
http://www.ushmm.org/research/center/publications/details.php?content=2010-06