'With the French gone, we will see to you Jews' 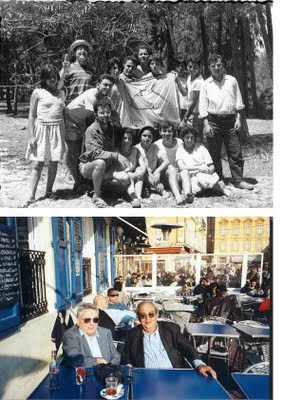 It is fifty years this summer since the 1,200 Jews of the strategic port of Bizerte were caught in the midst of fighting between French and Tunisian troops. For Jewish teenagers stranded at a summer youth camp in a pine forest by the sea, the experience was particular alarming. They were grilled by Tunisian forces and accused of being French agents while simultaneously being bombed by the French.
A blogger called Meyer on the website Harissa has assembled every post he could find relating to the Bizerte crisis. Here is one extract (from Israel Magazine no. 102), describing how Mossad rescued a group of Jews:

That Saturday evening in September 1961 will never fade from the memory of Maurice Matok. It was the night of the exodus -"from darkness to light", just like the Hebrews out of Egypt. An exodus from terror - to be precise - from Bizerte, the Tunisian port city at war, divided between French and Tunisians fighters. And caught in the middle, a few hundred Jews were threatened by their Arab neighbors who were heard to say, " Just you wait - when the French are gone, we will see to you."

With the departure of the French, and the independence of Tunisia in 1956, only the great naval base at Bizerte had remained in French hands. Next to it was an anti-nuclear base. In 1961, the Tunisians insisted on the evacuation of French Bizerte. The summer of that year saw the outbreak of fighting in the town between the French and Tunisians. There were hundreds of deaths.

The Tunisians were unsuccessful in their attempt to conquer the port of Bizerte and the French paratroopers took the whole city. The 1,200 Jews in 1200 Bizerte were in a difficult situation because the Tunisians had accused them of having cooperated with the French.

In early September 1961, the situation worsened. It was only a matter of time before the French would leave. The natives threatened to take revenge on the Jews soon after their departure. Even before that, Jews were arrested and accused of espionage and subversion.

Haim Yaïche, a retired painter in Ashdod, recalls: "On Saturday morning, we were told: Be ready, start packing and in the evening we will pick you up. On several occasions we were about to leave, but there was confusion and everything fell apart. But Saturday night, all the cars belonging to Jews were requisitioned and were were told (by the Mossad) that we would be picked up. In our suitcases we had only the bare necessities. I locked the house and took the keys. To whom would I hand them over?"

What is it about Jews that they don't "get it" that what an Arab says one day means nothing to him another day, and certainly nothing to the one who takes his place?