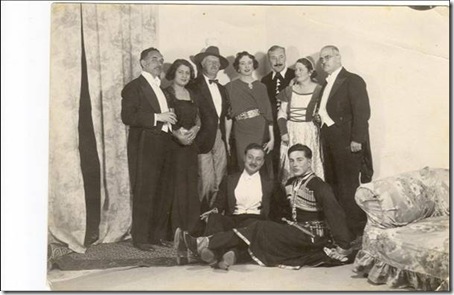 From the truth-is-stranger-than-fiction department: the grandson of the Iraqi Prime Minister Nuri al-Said, who did more to drive out Iraq's Jewish community in the 1950s than anyone else, became an Israeli kibbutznik (according to an unconfirmed report, he later trained to be a combat pilot and fought in the Six-Day War) ! This piece in Time magazine dates back to 1958, the year when al-Said and the royal family were slaughtered in a bloody coup (with thanks: Niran):

Among Arab leaders, Iraq's late Nuri asSaid probably led all the rest in the bitterness of his public excoriations of Israel. But fate appears to have played a last weird trick on the murdered Iraqi strongman. Out of Jerusalem last week came a strange story: Nuri Pasha's only survivor may be a 16-year-old Jewish boy (he would now be 68 - ed) now living in an Israeli border kibbutz.

The boy's mother, Nadia Maslia, told Israeli newsmen that she met Nuri's only son, Sabah, in the early '30s when her family of wealthy Jewish bankers in Baghdad often did business with the Pasha. Though Sabah, an Iraqi air force officer, was already married to an Egyptian heiress, he fell in love with Nadia and kept trysts with her in London and Lebanon. Finally he asked her to become, as Mohammedan custom allows, his second wife. They were married at Mosul in 1939, lived in Nuri's household in Baghdad, and fled with the rest of Nuri's family to Palestine when a German-backed army coup momentarily toppled his government during World War II. On their return to Baghdad, their son Ahlam was born in 1942. Though at first opposed to the marriage, Nuri Pasha used to dandle little Ahlam on his knee, kept his picture on his desk.

After World War II anti-Jewish sentiment grew in Baghdad, and Sabah's Egyptian wife schemed successfully to get Nadia out of the house. In 1946 Nadia took her son and moved to the Jewish part of Palestine, which became Israel two years later. In Tel Aviv, where she bought a hotel and other property and sent Ahlam to a Jewish school, Nadia concealed her family connections even from her son until last week. Nuri's grandson, by Judaic law a Jew because his mother is Jewish, is due to be conscripted into the Israeli army within the next two years. He may well be Nuri Pasha's only descendant left on earth. According to Baghdad reports, all members of Nuri's family, including Sabah, his Egyptian wife and their two children*, were slaughtered in last month's bloody rising.

*Sabah's artist son Issam survived until the age of 50
Posted by bataween at Wednesday, September 29, 2010

Very Intresting! Where does he live now? Does he still carry the name Ahlam Sabah Nuri Al-said?

the article contains some errors:Nuri Al-said's granchildren Falah & Issam passed away after the Iraqi revolution in the early 1980's. Falah Al-Said had 3 children who presently live between Europe and the Middle East.

It would surprise me if he still carries that name. We have no further information about him.

Would it be possible to get contact information of the person who wrote the brief introduction before the article?

Zaina, this was written in 1958 - the writer might be dead! You could try Time magazine

No I was inquiring about the person who wrote the very introduction bit, not the article: "From truth...(Niran)" is not part of the original article.

I wrote the introduction, and was just summarising what we already know. Sorry, I have no further info.

My Dad(rest in piece) was a very close friend of Sabah Nuri Al Said and he & my Mum they were telling me lot of stories about Nuri Pasha & Particularly his son Sabah , I never heard this kind of stories and you can check with all the people who are still a live specially the people who were close to Nuri Pash's family they should know my dad , he was a pilot & a very very close friend of Sabah

That is very interesting - was your dad one of the pilots who airlifted the Jews out of Iraq?
The story about Sabah's son with Nadia remains a mystery - perhaps the Masliah family, if anyone knows of them, might be able to confirm or deny it.