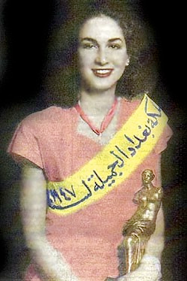 Rare photograph of Renee Dangoor in 1947, the year she was crowned Miss Baghdad

As bombs continue to wreak their havoc in Iraq, a wave of nostalgia harking back to a more settled era appears to have swept over the country. And ironically enough in a state where all but six Jews have been driven into exile, it's a trend in which the image of a young Jewish woman has acquired almost iconic status.

Renee Dangoor died two years ago, but seems to have acquired immortality in the minds of many. Her son David has been tracking mentions of his late mother on the Internet. Renee Dangoor has no less than 2,700 Arabic website references on Google.

The first Iraqi newspaper to write about Renee Dangoor was Al-Mutamer in 2003: "Baghdad used to be a city of peace and tolerance, where people enjoyed calmly drinking their coffee, strolling with ease, retiring at night with confidence, and waking up in the morning with a new hope. People were really living the good life.

"In those days, Iraqis were satisfied with the simplicity of their lives, feeling secure in their homes and streets. They were able to plan their days and nights without any fear for their lives or those of their children from primary school on to graduation, career and marriage. And they also had the opportunity to value beauty and appreciate it, and even to hold beauty contests."

In 2009 Abd-al-Jabbar Al-Otabi wrote a piece for the website Elaph. The author is aware that Renee Dangoor is Jewish, but says, 'I did neither care about her name, nor her affiliation':

"I was impressed by this very rare picture of the beautiful queen of Baghdad - 1947, Renée Dangoor, Iraq’s beauty queen. This picture of the young lady and the event in which she was awarded that title made me reflect on the situation in Iraq over the past several years, year after year. Over many months and days I was looking for similarities. However, I come back to contemplate the face of this beautiful quiet girl and the words embroidered on the sash on her chest. I did neither care about her name, affiliation nor its meaning, insofar as she is Iraqi. At that time, she was chosen to live in Baghdad, nearly sixty years ago, or other Iraqi areas.

"If she were alive now, I wonder what would she think about recalling the memories of those days when beauty reigned in the bosom of Baghdad."

It's funny that another Jewish woman was chosen as a beauty queen at about the same time. My distant cousin Bess Myerson was chosen as Miss America in about 1946 or 1947, as I recall.

Your Bess sounds quite a character
http://en.wikipedia.org/wiki/Bess_Myerson
Interesting taste in lovers - She had an affair with a sewage contractor...

it seem iraqi jews were living happy life in iraq. the creation of state of isreal complled them to join to promise land. no one drive them. is it right?

No Zain, it is not right. How happy would they have been in 1941 (seven years before Israel was created) when 180 Jews were murdered in the Farhoud?

I'm from Iraq now in Baghdad Salami all Jews love you

I had the honor of meeting Bess Myerson when she was campaigning to elect Ed Koch as mayor of NYC in 1977. She was well into her fifties. But still absolutely gorgeous.Ms Myerson was crowned Miss America in Atlanti City in September,1945.