Capturing the taste of Rosh Hashana gone by 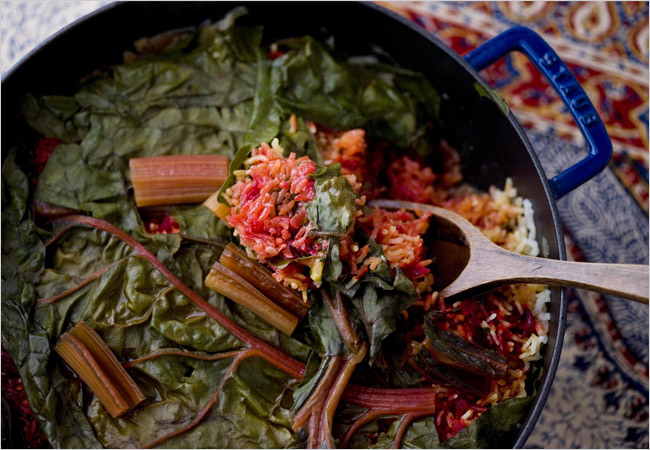 Writing in The New York Times Joan Nathan is taken by Esperanza Basson, originally from southern Iraq, on a journey into the Jewish culinary past.

The traditional dish, one her family had eaten at Rosh Hashana for generations in Amara, a city near Basra in southern Iraq, was made by stuffing Swiss chard leaves with beets, onions, rice and sometimes meat. It was simmered in a lemon sauce with sugar to mitigate the bitterness of the leaves.

Other cooks, she explained, prepare a sweet and sour sauce that combines tart tamarind with brown sugar or a syrup made by slowly cooking dates, a technique that stretches back to the Biblical period.

Mrs. Basson’s family has always called the chard dish “mahshi.” (Mahshi means “stuffed” in Arabic.) Because once Mrs. Basson couldn’t find undamaged chard leaves to make the traditional version, she decided to make the dish in layers, calling it “fake mahshi.” To her surprise, the dish tasted just as good.

As I dipped my fork into the vegetables and the meat, I felt as though I was taking a Jewish journey into the past. Jewish cooks have always varied dishes depending on where they lived and what was available. This dish, first created in Iraq or perhaps Iran, traveled throughout the centuries on the trade routes with rabbis and merchants. It migrated as far as Lithuania, where one Rosh Hashana I ate a version with grated beets, sweet potatoes and beef.

“I would say this dish is about 1,000 years old,” said Paul Freedman, professor of medieval history at Yale. “The sweet and sour probably came from Persia and went as far west as Andalusia with the traders. The mercantile and rabbinic network of Jews created an arch of tastes and food.”

As we ate, Mrs. Basson, who had come to Israel in 1951, explained that Iraqi and other Sephardic Jews have a Rosh Hashana seder. Although the Passover seder is the best known, the word refers to a traditional order of events. In the Sephardic seder observed on Rosh Hashana, a series of blessings is said over squash, leeks, dates, pomegranates, black-eyed peas, apples, the head of a fish or a lamb and Swiss chard and beet greens.

The Hebrew word for beet greens and Swiss chard sounds very much like the verb meaning “remove, throw out, or cause to disappear.” The blessing Sephardic Jews recite at their Rosh Hashana meal before eating beet greens or chard leaves translates roughly to “May it be your will, O God and the God of our forefathers, that our adversaries be removed.”

WISHING ALL READERS OF 'POINT OF NO RETURN' SHANA TOVA !

This discussion of the Jewish taste for sweet-sour dishes reminds me of a joke I love to tell at Rosh Hashona:

A.: 1,063 years that Jewish people had to wait for Chinese food.

If our collective love of sweet-sour dates back to over a milenia ago in Persia we sure came by it honestly.