An Iraqi Muslim at a Passover seder

An Iraqi Muslim taking part in a Passover seder in the USA finds it stirs in him memories of how Jews were regarded in his Baghdad childhood. Sarmad Ali writes in The Wall St Journal:

"A few weeks ago, I flew to Michigan to join my close friend’s family in celebrating the Jewish holiday of Passover. It was my second time going to a Seder and it again stirred memories of how Jews were regarded in Iraq in my childhood.

"The first night we had a fairly big table with a dozen people or more. My friend’s grandfather sat at the head of the table and led the readings, asking others, including me, to recite some passages from a Passover booklet. When a reference to the Euphrates River came up, I leaned over to point it out to my friend. “These are my people,” I whispered, chuckling. The reading was punctuated with jokes and questions as we went around the table telling the story of how the Jews were slaves and then left Egypt. I found that part interesting. (...)

"Before coming to New York in the summer of 2004, I had never heard of any Jewish holidays, nor had I met any Jewish people. By the time I was born, there were no Jews left in sight in Baghdad. The handful of elderly Iraqi Jews who surfaced in Baghdad after the U.S. invasion, whose stories were reported in Western media, seem to have survived in Iraq all those years either by hiding their identity or by being just too old or secular for Saddam’s government to worry about.

"The only mental images of Jews that I could think of growing up in Baghdad came from Egyptian movies; for example, about an Egyptian-trained intelligence agent who infiltrated Israel during former Egyptian president Jamal Abdel Al-Nasser’s era, or a television series that showed a synagogue with black-clad rabbis that depicted prophet Mohammed’s era in the Arab peninsula surrounded by Jews hatching conspiracies against Islam.

"When I was in college in Baghdad, my concept of Jews narrowed to Israeli soldiers carrying machine guns as shown on Iraqi news channels. During the Palestinian intifada or uprising, the Iraqi channels showed footage of Israelis killing Arabs and destroying Arab villages. Some of the footage accompanied patriotic songs about liberating Jerusalem. The Jews were portrayed as vicious people who were behind every war and catastrophe in the Middle East. Even the word yehudi, which in Iraqi dialect means a Jew, came to most frequently describe a mean and vicious person.

"In the old part of Baghdad, where I spent 25 years, my grandparents sometimes talked about how in the old times in Iraq Jews and Muslims like themselves co-existed. By “old times” they meant way before the Baath Party took power in Iraq and before the Jews were forced to leave. 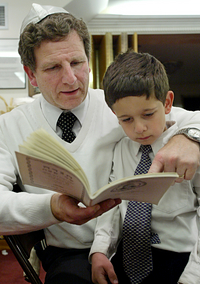 David Nissan of Roslyn, N.Y., helped his seven-year-old son recite from the Hagadah Shel Pesach during a seder for Iraqi Jews at the Congregation Bene Naharayim, in Queens in 2003. (Photo: Associated Press)

"My grandfather was especially nostalgic about those old days, when people from different religious backgrounds co-existed peacefully in Iraq. He used to tell me stories about how the store around the corner from my house used to be owned by Jews or how that neighborhood’s houses with heavy old wooden doors and basements were inhabited by Jewish families before they were expelled from Iraq in the 1950s and 1960s. In fact, my grandfather, who died in the mid-1990s, always referred to some neighborhoods by their old names, the ones he grew up with during the British mandate. Those names were less familiar to me and my generation. For instance, he used to say that, “so and so happened today in the Christian Quarter,” or he would ask me to go buy him cigarettes “from the Jewish Quarter.” I had no context for those names and had to ask him where they were in relation to other things.

"In Saddam’s Iraq, where I grew up and spent most of my life, even whispering words such as “Jew” or “Israel,” if not used in a derogatory way, could get a person in trouble. In fact, the only times people pronounced words such as “Jew,” “Jewish” or “Zionist” were in a demeaning sense."